It cannot be found in fear, anger or when overwhelmed.

Hope must be cared for. It has to be nurtured and fed yummy treats.  Hope needs love and trust to grow.

Many people give up on hope because they are told it is not realistic and they need to face reality.

But what is reality?

Do you prefer living with hope or without it?

I prefer to be hopeful.”

*This post was written by Emma, including the title and she chose the accompanying photograph.*

This photograph is what Emma chose to represent hope. It is a pine cone with a metal heart, resting atop her great grandfather’s tombstone.

How We Got Here

There’s no way to say that on such and such date everything changed.  Like so much in life it was the incremental, seemingly, not-so-important things that occurred one after the other that then allowed for the next thing and the next until there was that moment we remembered and now look back upon and say, “oh yes, that was when everything shifted.”  Our version of having a – Helen Keller moment –  the day when W-A-T-E-R suddenly made sense, didn’t happen.  At least not like that.  There wasn’t any ONE moment when it all changed, but more a series of moments one after the other that led to a number of “OH!” moments.

One of those “OH!” moments was when Emma went to see Soma Mukhopadhyay (I wrote about that session ‘here‘) and we sat with tears streaming down our cheeks because Emma knew how to spell October and that it was a month in Autumn.  Another moment, previous to that, was when Emma was working with Pascal (documented ‘here‘) over a year ago.  Pascal “asked Em what she would do if she went into her own bedroom and found baby bear in her bed, Em typed, “I would be scared and I would watch his mother.”

I read that sentence several times.  How can I describe the feelings that came with reading it?  How can I express the surge of hope I felt?  How can I possibly describe the feeling of euphoria?  This sentence, this idea was beyond what I have come to expect.  It suggested a whole other level of thinking, a thought process far beyond anything she has been able to express before.”

In retrospect it seems incredible that all of this came as such a shock to us, but it did.  As I’ve said before, we knew nothing.  Literally.  Nothing.  But we thought we knew a great deal.  We knew what we’d been told up until that point and then it seemed as though over night, we realized everything we thought we knew was wrong.  So it was little moments just like these, over and over and over again, that continued to happen leading up to the first time I took Emma to see Soma in Texas (described in more detail ‘here‘, ‘here‘, ‘here‘ and ‘here‘) last September and then returning home and not being able to replicate what Soma was doing. But I was so determined and had to fight how depressed I felt because Emma seemed unable to write words that I’d just seen her write with Soma and yet with me, nothing.  Nothing at all.  There was self-doubt and fear, just tremendous fear that I wouldn’t be able to learn how to do this.  Fear that I would never be able to communicate with my daughter in the way I witnessed her communicating with others like Soma and Rosie and Pascal and Harvey and Leah.

So I had to begin at the beginning with simple choices and felt so impatient and so worried that this was how it was going to be for the rest of our lives.  But I kept showing up each day and making us do our “study room” together setting a timer for ten minutes and then 15 and then 20 and eventually up to 45 minutes and making lesson plans and wondering, wondering, always wondering whether she would be able to get to the point where she could trust me and write with me as I saw her writing with Soma.

I found a woman in NYC whom Soma had trained and we began taking Emma to see her too and I studied the videos of Soma working with Emma and I made notes and spent hours and hours pouring over them and making lesson plans and practicing.  I wrote out scripts of exactly what I would say during our “study room” session, leaving nothing to chance and I kept at it. Finally, after what seemed like an eternity, but actually it was more like six weeks, I arranged to have a Skype call with Soma, having sent her a video of me working with Emma.  Soma advised me to ask her one open ended question at the end of each lesson, which I hadn’t dared do as the one session I had, it was a disaster and she wouldn’t answer me.  I said as much to Soma.  I told her I didn’t think we were ready for that and Soma said, oh yes, but she’s ready.  You must ask something simple at the end of each lesson. So I did.  I did because Soma was so matter-of-fact and sure that this was what needed to happen next.

Emma began answering these open ended questions, at first with a few words and then with longer, more complex sentences.  I began to ask clarifying questions and now…  now look at her go!  It makes me cry thinking about this actually.  I couldn’t have known it would all happen as quickly as it did.  At the time, the process seemed to take forever, but looking back one’s perspective is different and I see it as very fast and I’m just so grateful for all that work, for all those days I struggled and cried to my husband and didn’t believe it would ever be any other way…

By the way, I DO think those Helen Keller moments that Hollywood then immortalizes, has all of us very impatient and thinking life is like that. Of course you and I know, life isn’t so simple or easy, nothing ever is. There’s work, hard, hard work and hours upon hours of showing up over and over again, and then slowly change occurs and it seems incredible, even miraculous!  But no one sees all that work, all those days when things didn’t go well, all those days when tempers flared, when there were tears and frustration and doubt and even disbelief that it would ever be different… until it is.

To all of you reading this – this has been my experience, as a parent, as someone who has always been terribly impatient, but determined.  Emma’s experience has been different (I’m hoping she’ll want to write about that at some point.) Everyone’s experience will differ, but perhaps, just perhaps, my experience will be useful to those of you just beginning, or will bring a smile of recognition to those of you ahead of me, either way, none of us need do this alone.  I didn’t and I am so grateful to all of you who have helped me help my daughter get to where she is now.

Yesterday Emma did another “catch” at her trapeze school.  Yesterday’s catch was more complicated than the one she perfected a month ago and I cannot wait to see it.  I asked Em last night whether I could post it here and she said, “Yes!  Post on blog!” Since Em’s therapist, Joe, hasn’t had time to upload and send me the link from yesterday , I’m sorry, I can’t help myself, I am posting her first catch from a month ago AGAIN.  Watch all the way through to hear what Em says at the end, it makes me teary just thinking about it. 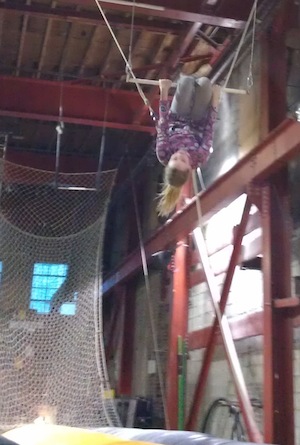 Watching her flying through the air makes me happy.  Seeing her joy and sense of accomplishment, makes me happy.  The first time I watched her swooshing through the air I felt a mixture of joy and trepidation, the second time a soaring hopefulness of all that is possible, the third time pride, knowing how hard she has worked, trained and practiced to get to this point.  Years.  Years of practicing.  Just now, as I watched it again, I was reminded of how, it is the connections with other people who make our lives full and joyous.  Connections rooted in trust, compassion, love, and a sense of belonging.

When Emma releases the bar and reaches out to grab the forearms of the other person, I cannot help but hold my breath.  Even though I know the ending to this particular story, I still hold my breath.  Will they catch her?  Will she fall?  Will she get hurt?  Can she trust them, rely on them to be there for her?   As I write this I know these are universal questions.  Questions I have asked with both my children in mind, questions I have asked about everyone I’ve ever loved.  But in this one instance Emma trusts the other person will be there to catch her and the tears fill my eyes because they are, yet I know this won’t always be the case.   As much as I want to convince myself that I have that power to always be there, to have every situation in my control, there will be times when I won’t be able to protect her from the disappointment and heartache that will come from trusting someone who cannot be relied upon.

But before I drift off into a melancholy laced reverie, I have to remind myself that this is my interpretation of how my daughter may or may not feel when faced with disappointment and the deep sadness that comes with trusting someone, only to feel let down by them or worse, betrayed.  My daughter has a very different outlook on life than me.  She has proven to me repeatedly that my life experiences are not accurate lenses with which to view or predict her life.  The beauty of being a mom is realizing my ideas about how my children will or won’t cope with the things thrown at them are not necessarily correct.  I believe this is what older parents of children who are now adults refer to as “letting go”!

In the twelve-step rooms there’s a great deal of talk about the g-o-d word.  It’s not a word that brings me any degree of solace, so I’ve learned to do what my friend Ibby calls a “work around”.  I don’t do the g-word, but I have faith.  Faith that if I am kind, generous and try my best to be of service, I will be better off than if I’m not.  This thinking doesn’t ensure those I love will always be safe, but it helps me stay centered and present one day at a time.  I can hear Richard’s voice in my head saying, “What?  That’s it?”  And my answer is to laugh and say, “Yup.  That’s pretty much the extent of my wisdom.” 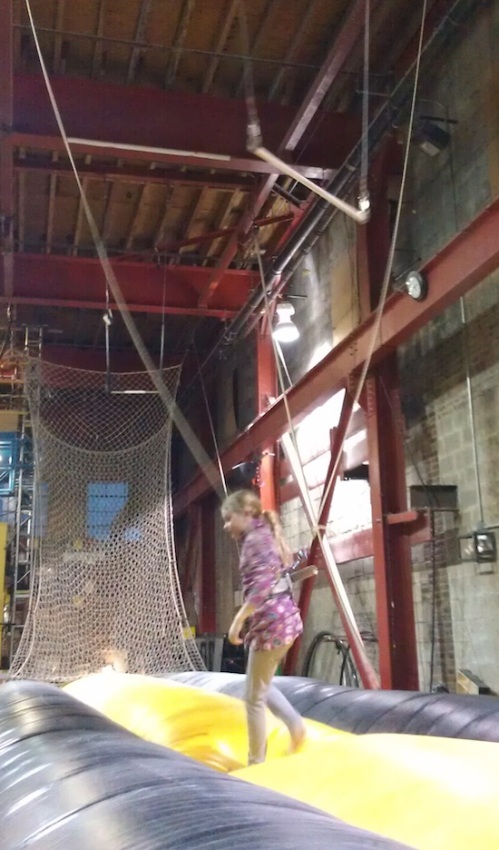