The Autcom conference was a fleeting glimpse into paradise.  A tiny taste of how the world could be were we accepting of each other, treated all people as equals and with respect, without prejudice, without assumptions, without bias.  Autcom was a window into how the world could be, but isn’t.  Not yet.  Words do not do this conference justice.  How could they?  How do you describe a room full of people who are connected not through race, nationality, religion, political views or neurology, but instead are connected by an idea.  A vision.  How do you describe that?

Accommodation – it’s a word we hear, but what does it really mean?  At the Autcom conference it meant waving hands at the end of a presentation instead of clapping, lowered lights, snacks that included gluten-free and casein free items and non dairy alternatives.  Accommodation meant no one stared disapprovingly at anyone who stimmed or made noise or got up to leave in the middle of a talk.  Accommodation meant people were polite and moved chairs that might be blocking someone’s ability to come or go.  It meant using a microphone or repeating a question for those who weren’t able to hear the first time.  It meant being respectful and considerate when someone came up to peer at your name tag and it meant understanding that when that person gently touched your hand after a presentation it was their way of thanking you and I defy anyone to not see the beauty and love in that.  Accommodation meant slowing down while someone typed their answer or question or thought.  It turns out accommodation means being a thoughtful, considerate human being who is respectful of others.  How is it this isn’t done automatically, as a matter of course.  How is it that we as a society have drifted so far from this very basic and easy way of being in the world?

The single biggest issue I had with this wonderful conference was that there were too many terrific things going on at once and it was impossible to see and hear everyone and everything.  To give you an example of this – on the first day of the conference after Ari Ne’eman’s welcome and an opening keynote address by Jennifer Paige Seybert, was Savannah Nicole Logsdon-Breakstone’s presentation – Loud Hands Project’s Neurodiversity 101.  At the same time, Larry Bissonnette, Pascal Cheng, Harvey Lavoy and Tracy Thresher were doing a presentation on Supported Typing, which I really needed to go to in order to assess whether this might be something we could use to help Em communicate more effectively, but next door to them was Nick Pentzell, Hope Block, Jacob Pratt and Autumn Dae Miller presenting “Rated “R”: That Oh-So-Difficult Topic”.  I cannot tell you how much I wanted to hear them too and later heard from others that it was a not to be missed presentation, sadly though, I missed it.  Human Development Journey was presented by Cecilia Breinbauer about using DIR, which was the method Richard and I were trained in by the late Stanley Greenspan, after abandoning ABA. 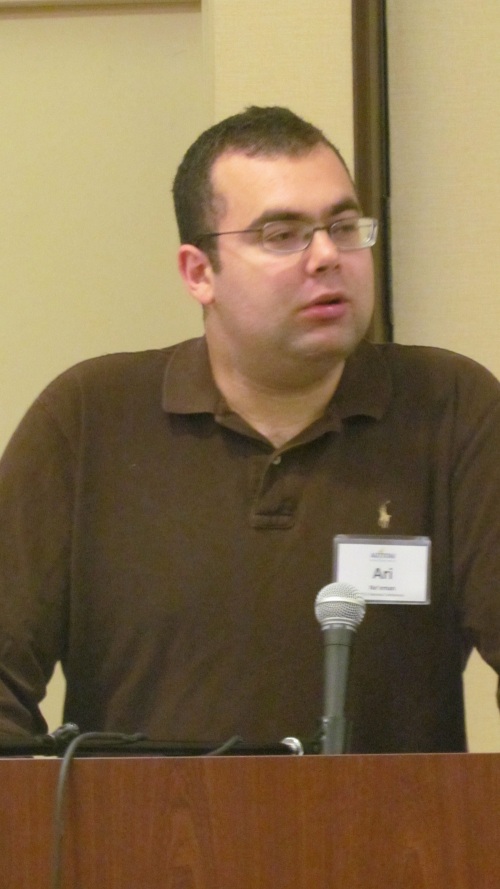 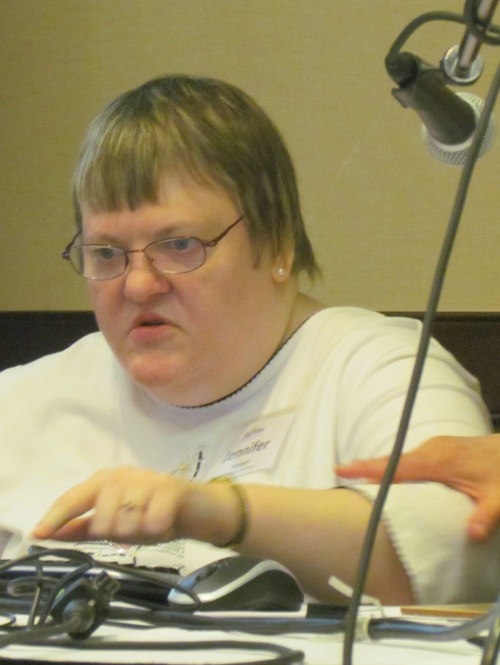 That evening after dinner and a wonderful performance by Jordon Ackerson who reminded me of Emma because of his beautiful voice, we watched Wretches and Jabberers, with a Q&A with Larry and Tracy.  This was my third time watching this documentary, which I posted about last month ‘here‘.   I asked them about self-injurious behaviors, something both engage in during the film.  I asked for  their opinion about the commonly held belief by many that SIBs should be thwarted and how parents and caregivers are often unsure how to deal with this.  Tracy typed, “That was years of frustration with no way to reliably express myself working its way out through my behavior the problem was lack of communication which pissed me off.”  Larry typed, “I lived in an institution so I was locked in arms of restraint its legal but immoral and only represses anger nothing looks more kind than softly spoken words and lit up smiles.” 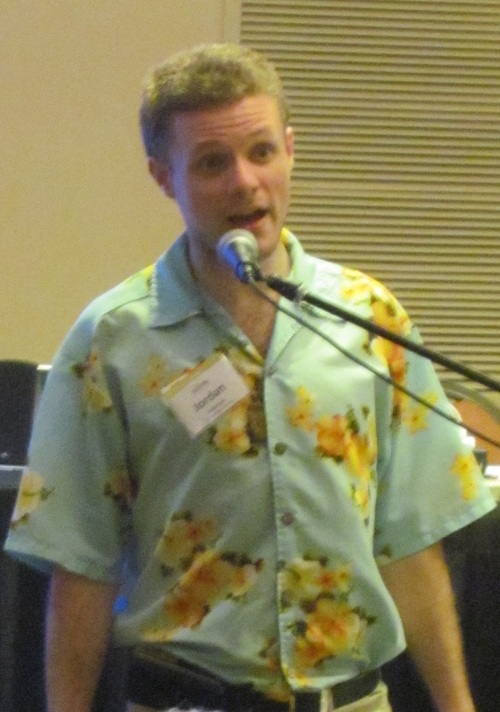 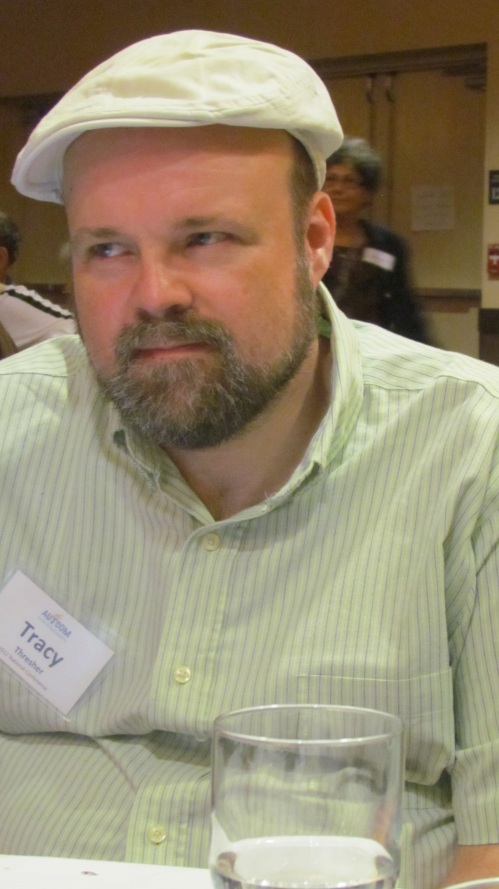 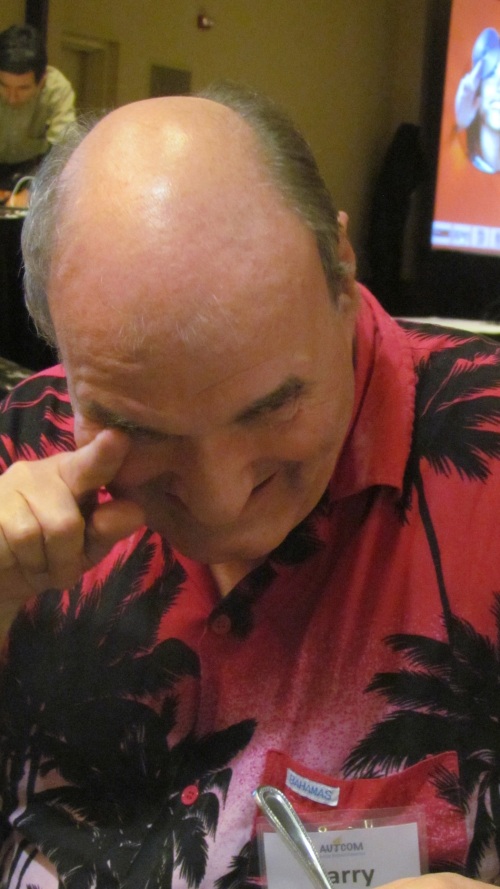 Read that again.  “… nothing looks more kind than softly spoken words and lit up smiles.”  The presentations were terrific, but it was what is possible that this conference represented, which affected me most profoundly. The AutCom conference was an example all organizations, who say they are interested in Autism and helping those who are Autistic, should follow.  Autistic people make up a large portion of their board, Autistic people led more than 50% of the presentations, the audience was at least half Autistic, if not more.  At my presentation there were more Autistic people than not, for which I was truly honored by.  The conference showed what the world could be like if we work together, reach out to each other, include everyone despite our perceived differences with love, compassion and kindness.  Accommodation is less about accommodating and more about getting in touch with our humanity and what it means to be alive and sharing this planet together.  Accommodation and inclusion means we ALL benefit.