“Time to wake up the boys and grab the plunger,”  Richard replied.

“It’s a good one,” Richard grinned.

A little back story:

Our bedroom is like Grand Central Station.  Allow me to explain and for the record – no, it is not because we’re running some sort of upscale brothel.   Our bedroom is the first place both the children want to be when entering our home.  Is anyone thinking, these people clearly need boundaries?  Well for those who are, you have a valid point.  I don’t agree with it, but it’s valid and for those who were not thinking it, I’ve probably planted that little seed into your minds and NOW you are at least considering the idea.  To you I say… whatever, eye roll and shrug before walking away.  But I digress…

Our children are drawn to our bedroom like bees to the hive.  It’s like some  kind of  vortex, a siren song calling to them.  A place that instills comfort, a feeling of safety and serenity, like a soft, sensual womb.  Or maybe it’s the really big TV screen that calls to Nic and our king sized bed with silky sheets that beckons to Emma, it’s hard to say and I haven’t done a scientific study (pause)  yet.  As a result our bed is in a constant state of unmade disarray, rumpled sheets, pillows abandoned on the floor, mattress askew.  Richard, who, it has to be said, is just a tad compulsive – cough, cough, totally OCD, cough – about the bed being made each morning, is driven to distraction by this state of affairs.  We make our bed at least four times throughout the day.  Richard is rolling his eyes and muttering – What’s she talking about “we”?  I’m the one who’s making it all the time, not her.   But why quibble about the details?  All of that is beside the point.

It is not just our bedroom that draws the occupants of our house, it is our bathroom as well.  We have three bathrooms and yet, the children prefer ours.  Again, I have no answers.  So it is not unusual for Richard and I, as happened last night, to come home from our “date night” to find our toilet clogged.  To be blunt, both our children are cloggers, ‘nuf said.   I’m German, or at least part German and could go on and on about this, but the Swiss part of me is calling for a little restraint, so I will.  Restrain.  Myself.

Because we are busy and somewhat disorganized, we have not gotten it together to purchase more than one plunger for the house.  And last night that one, coveted plunger was not in our bathroom.   Not wanting to risk waking either child to locate said plunger, we opted to leave the toilet seat down and figure it out in the morning.  I know, this is bordering on TMI (too much information).  What?  I’ve already entered into the TMI zone?  Okay, well again, whatever… All of this is in explanation for Richard’s call to action, “Wake up the boys and grab the plunger!”  Personally, I think it’s an excellent way to start the morning. I intend to repeat this, completely out of context, in the coming weeks and months, because, well that’s the way I roll.

As a quick aside,  Emma will be singing in her end of the year performance at her school this morning.  I cannot wait!

Emma took this photograph of our bedroom two days ago.  Can we all appreciate the symmetry, the angle, the lighting… 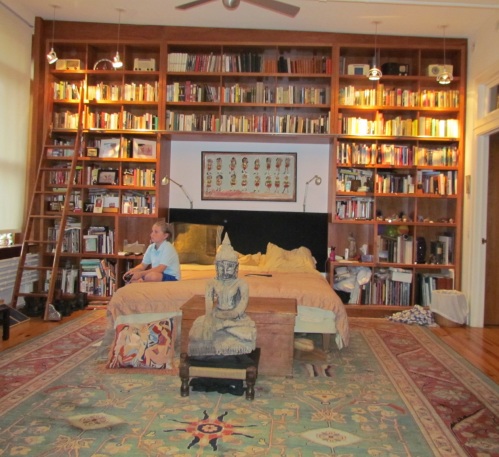