Theories or What Does the Least Damage?

“Of all the therapies and various interventions we tried before you were able to write to us, did any help you?” I asked Emma the other day.

“No,” she wrote and then looked me in the eye and said out loud, as if I might not have understood her, “No.”

I have written about what we would have done differently had we known all that we now know ‘here‘ but still, I have to admit, I was surprised.

“It is helpful to move,” Emma wrote.

And then I realized.  I was doing that thing that people so often do.  I was asking her a question, she was answering and then, because I couldn’t fully take in her answer or because I was hoping for a different answer, I was asking again.  If this were an interrogation it would be called, “leading the witness.”  Asking questions to elicit a particular response.

“Really?” I said, without thinking.  This time, Emma didn’t even bother to answer, she just looked at the timer and observed out loud, “Six more minutes and study room is allll   doooooone!”

I know for parents new to autism, these words may strike terror.  I remember early on being told about a parent who chose not to do any of the recommended therapies and being horrified.  Wasn’t doing something, even if it wasn’t helpful, better than nothing?  And then I met Henry and Kamila Markram.  They are the two neuroscientists who came up with the Intense World Theory of Autism.  It was Henry who suggested that if you could create a stress free environment for your young child, if you could shield them from surprise, create a calm, safe environment, you would do more for them than any therapy currently available.

Now for those reading this who are thinking I am saying this amounts to doing nothing, I’m not.  But there are those, like Uta Firth and Anna Remington, who insist the Markram’s recommendation, to lessen or adjust the stimuli in autistic children’s environment, is comparable to Romanian orphanages’ and go on to say, “insufficient stimulation and impoverished neuronal input in early development are damaging to children’s social, cognitive and emotional functioning3.” Except this shows a serious  misunderstanding of what the Markram’s are suggesting.  Neglect, mistreatment and being chained to a bed are not what I would call providing a safe, loving, environment free of surprises and lessening of outside stimuli.

All children crave stimulus, but with the hyper/hypo-sensory issues that confront most if not all autistic children, Dr. Henry Markram suggests sheltering children in a comforting environment that minimizes surprises, sudden unexpected changes of plans, entering new, unfamiliar environments without any preparation, sensory assaults from loud sounds, bright lights, etc. He especially suggests avoiding confrontational behavioral therapies that demand eye contact, verbal responses, compliance and restricting movement.  What makes sense to me?  Following the child’s lead in seeking out craved stimuli. This is an aspect of Floortime that I think is a good approach.

As for other suggestions on “the right way to do it” I’d love to hear more ideas from our autistic readers. What do you think would be truly helpful?

Ideally we would have more scientific studies that show which of these various ideas are correct and that parents should do x, y and z while knowing that they were doing the right thing, the best thing, for their child, but we aren’t there yet.  So until we do know, without a doubt, one way or the other I am going to continue to look to Autistic people and my daughter to guide me.

In the last two days I have been sent two different graphics supposedly about autism, but that upon reading take my breath away because of their blatant inaccuracies and biases.   The last one was in the shape of a pyramid in a shade of blue I’ve come to despise with the heading, “Impairment in Imagination” and I just wanted to cry.  Impairment in imagination?

You have no idea how much I wanted to hit the delete button and scream or bite someone, which always reminds me of a scene in the British comedy, Shawn of the Dead where the main character’s mom is bitten by a zombie, but she doesn’t say anything until her son asks, “Mom, are you okay?  Did he get you?”  And the mother smiles weakly, as blood gushes from her arm and replies, “Well, he was a bit bitey.”  Hilarious.  Only what I was feeling when I read “Impairment of imagination” was not hilarious.  No.  Not at all.

Underneath that unfortunate heading was written, “Deficits in flexible thinking regarding interests, routines, perspectives and rules.”  Two key words are used in these first two sentences “Impairment” in the heading and “deficit” in the second.  The first is just incorrect and the second is a stereotype that while it may be true for some people it certainly cannot be stated as fact for ALL people.  I purposely did not say “Autistic” people because rigidity and a reluctance to see another’s point of view are things many human beings have trouble with and this is not something that can be pinned on one specific neurology.

Below this, the graphic reads, “does not understand other people’s points of view or feelings.”  Again I could list a number of non autistic people in the news who would certainly be terrific examples of this sentence.  To suggest that this is a defining characteristic of Autism is inaccurate and plays into the whole “lacking empathy myth” that so many believe as fact about Autistic people.  Please read Drs Kamila and Henry Markram’s Intense World Theory of Autism for another thought regarding autism.  And by the way, the Markram’s, both of whom are neuroscientists, call it a “theory” because they understand that it is not scientifically proven fact, but a theory they developed and continue to tweak as they learn more.  They are highly regarded, acclaimed, well published and the two people working in the field of autism whose work I believe will eventually change how autism is viewed.

The next line of text on the graphic reads, “Agitated by changes in routine.”  This line would actually be fine if it weren’t for all that precedes it.  But I would also suggest that this line could be said about all young children.  And in the end this is my criticism of the information that is being given to people about autism.  Autism as defined by a list of deficits that added up does little other than to create panic in parents of Autistic children.  I’ve written about this before ‘here‘, ‘here‘ and ‘here.’   These posts are just a few examples of things I’ve written describing what fear did to me and why terror does not motivate people to make good decisions or help them decide how they can best support and encourage their children to be all they can be.

This particular graphic goes on with headings of:  “Impairment in Social Relationships,” “Impairment in Social Communication” and at the base of the pyramid the heading says:  “Additional Difficulties” where they list, among other things, “Appears to enjoy being held/restrained…”  NO!  This is absolutely wrong.  You cannot write that someone “appears” to “enjoy” “being restrained” thereby justifying sadistic behavior done by staff/therapists/parents/ANYONE.  And again, I  want to SCREAM!  Who is writing something like this?  This is a graphic that is being used by a school for Autistic children.  It is a graphic that is stating things as though proven fact.  A graphic that parents, children, educators are seeing.

We have to ask ourselves – WHAT ARE WE DOING?  How is it okay to publish such statements as though they are fact about a neurology that the best neuroscientists in the world are baffled by?

Please.  If you are confronted with a graphic that is anything like what I’ve just described, do NOT share it.  Do NOT believe that these things are a fact, just because they are written as though they are.  Do not add to the misinformation by repeating it.  DO NOT.  It is statements like this, one page info graphics written by non autistic people, who are not neuroscientists, who seem to know very little about autism that cause tremendous damage to the Autistic population.

We must all become critical thinkers when it comes to information about autism. We know very little about the human brain.  The best and smartest neuroscientists in the world are working hard to gain a better understanding. Most of what we are being told are theories, please let’s not treat these as fact.

The icare4autism Conference in Jerusalem

The icare4autism conference ended this afternoon.  It was a whirlwind of activity spanning 48 hours of discussions and presentations led by scientists, therapists, neuroscientists, policy makers, parents and advocates.  Stephen Shore, who is Autistic, gave the single most entertaining presentation, entitled:  Employment Opportunities for People with Autism: Observations on Promoting Success.

On the first day I interviewed Henry and Kamila Markram, the neuroscientists who came up with the Intense World Theory of Autism, the only theory I’ve read and heard that makes any sense and which validates my own observations of my daughter, Emma.  Yesterday I spoke with Joshua Weinstein, the CEO and President of icare4autism.  He seemed genuinely interested in hearing from people.  He actively sought out suggestions, made himself available to anyone who approached him.  He seemed sincere in his desire to bring scientists, therapists, parents, researchers, educators and advocates  together.

The organization’s weakest point is in having Autistics on their advisory committee.  According to the sheet I received there aren’t any, and only one Autistic person, Stephen Shore, was at the conference presenting.  Perhaps after today’s conversation that will change.  I hope so.  I would like nothing more than to write glowingly about an organization that carries the word “autism” in it’s name.  I spoke out whenever it seemed even remotely appropriate.  But by the end of the conference I had made my – Autistics must be included in this organization -speech more than a dozen times.  Only once was I met with any argument and interestingly enough, that one time was from a parent of a “severely autistic child” as she described him, who was furious with me for suggesting we needed to move beyond the autism = tragedy model.

There is tremendous misunderstanding surrounding labels and the designations of low, high, severe and mild.  It was clear that people do not understand why these labels are unhelpful and the terms were thrown around a great deal during a number of the presentations I attended.  Another huge misperception surrounds intelligence or “lack” of in Autism.  I was astonished to hear the words “mental retardation” used in connection with autism during a couple of the comments from the audience.  I hadn’t realized that was still thought, by many, to be synonymous with autism.

The really good news is, I heard questions surrounding the “ethics” of various treatments and interventions for Autism and I was relieved to hear a number of people talk about the abuse, mistreatment and need for greater advocacy among the Autistic population.  Of course the best advocates are Autistics themselves and so I hope icare4autism will heed some of my suggestions.  I was not the only one making these suggestions, by the way.  There were a number of people, including Stephen Shore who was wonderfully articulate in his opinions and ideas, who brought up the need for Autistics to represent themselves and the importance of Autistics to be involved in all levels of any organization that carries the word autism in its title.

Finally, I miss Emma terribly and cannot WAIT to see her this afternoon.

Em in the playground 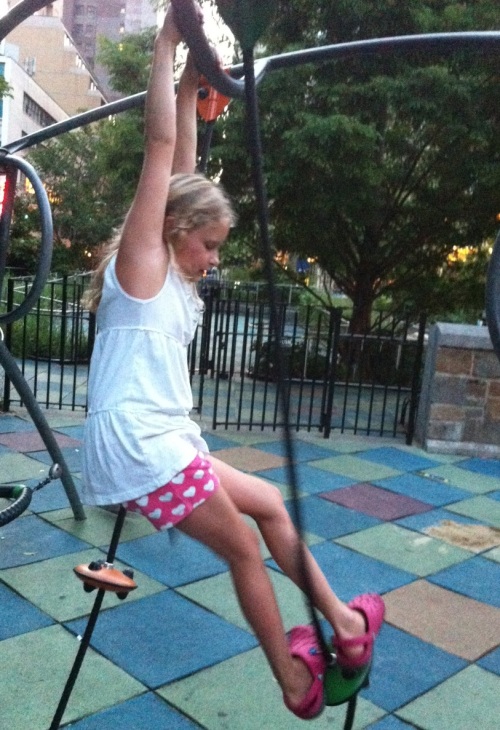