Have Your Voice Heard!

For my Research and Writing English class this year I have to write a paper on a topic of my choice that weaves data and data analysis with factually based interpretation of that data. My research question for this paper is:  To what extent is it possible to compare the ways in which methods of communication are being taught to autistic students who cannot use spoken language to communicate their complex ideas?

Because many existing communication methods are underrepresented in most schools, I created a survey to find out what methods students use, what they are being taught to use and how successful each is.  Additionally I am curious to know whether a student’s school allows the communication method chosen by each student to be the most beneficial, and if not, how the student then communicates their complex thinking and knowledge.

This survey uses a google form and is completely anonymous.  You will not be asked for any contact information, your name or the name of your school.

Who I’m hoping will participate:

This is the link to my survey:  Survey

I hope you will add your voice and experience by participating in my survey.  I am glad if you do.

Have your voice heard!

Banding together with our typed words, 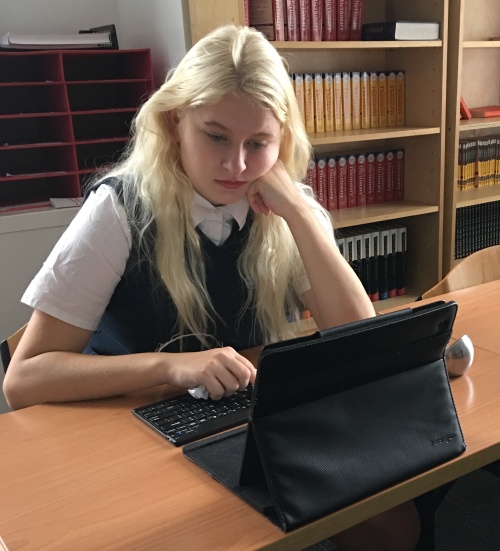 That’s me, Emma, at school this morning.  Photo credit: Mom aka Ariane Zurcher

“No one knows how to help us.”  This was what I once said to my husband.  It was many years ago.  So many, I no longer remember the year.  Along with that realization was this one – “We are in this alone.”  And while, at the time, that thought terrified me, it was the beginning of finding another way.  It was the moment when I realized all these people we were looking to for guidance, didn’t know what was best for our daughter, even when they believed they did.

In the beginning we were told how fortunate we were, our daughter was “mild” we were told and if we followed their advice – an aggressive implementation of ABA, Speech Therapy and Occupational Therapy – she would be in a regular classroom by the time she entered kindergarten.  She was still two years old when she was diagnosed and we knew nothing about autism.  We did as we were told.  We were assured she would “skyrocket.”  We fought to increase the hours of therapy, we went to the team meetings, we took notes, we learned how to “play” with her using ABA’s techniques, we monitored her and kept charts.  We filled notebooks with our observations and we waited for her to “skyrocket.”

When she turned three we enrolled her in an ABA based pre-school.  By the end of that school year I no longer believed all that I was being told.  The therapists were no longer assuring us she would “skyrocket.”  Now words like “red flag” were being used to describe her behavior.  She had “behaviors” and these were being pinpointed and noted with alarming frequency.  We were getting reports of non-compliance, an inability to “use her words” as though she was being defiant  and then she began to self-injure. No one understood why.  Everyone was baffled.

And now, so many years later, I look back on those years and it all seems so understandable.  They say hind sight is 20/20, that looking back we can easily understand that which was once incomprehensible.  I understand now.  We didn’t appreciate what was going on.  We didn’t think we understood our child, and for the most part we didn’t and we kept looking to others to explain her to us.  The explanations they gave us, we believed.  We thought, since we didn’t understand and they seemed sure that they did, they must be right.  It took several more years for me to realize they didn’t and they didn’t know how to help us or her either.  When the methods they believed in didn’t do what they believed should and would happen, they blamed us and they blamed her.

Emma continues to remind me that “regret is not needed” and she’s right.  I am working hard on that one.  I cannot describe someone else’s experience, I can only write about mine.  This was mine.  As the mother of a daughter who was once believed “mild” and later “moderate” and finally “moderate to severe” on autism’s vast spectrum, we have learned a great deal.  And while many may not derive any solace in what I’m about to say, I would have.  No one can predict what life holds for your two, three, four, five, six or seven-year old child.  No one can predict another’s future, there are too many variables.

That my daughter has some spoken language is, and was, the single biggest red herring for those who meet her.  It never occurred to us that all that speech therapy, focusing on spoken language, would ultimately be unhelpful.  I knew nothing of AAC  (Augmentative and Alternative Communication) devices or methods and as spoken language seemed to me to be the ideal, the idea of her using something else honestly never crossed my mind.  Why would I encourage her to use something else to communicate if she could speak?  When, after years of speech therapy focusing on spoken language, she still couldn’t have a conversation with us, our answer was to try more, push harder and it would come.

So many people ask what we would have done, knowing all we know now.  This is a question that is specific to my daughter, but I know there are other children who are similar as I’ve met so many of them.  I would not have waited so long to begin using other forms of communication.  In fact, this would have been the thing I would have concentrated on right away.  There is no evidence that using an AAC device will have a negative effect on spoken language acquisition, in fact there are studies showing the opposite is likely to be true.  Had my daughter been able to communicate at an earlier age, many things would have changed.  The most important one being that we would have understood much earlier all that she knew and understood.  This may strike some as a little thing, but I can assure you, had we realized this early on, had we believed this right away, it would have changed every single decision we then made.  Not to mention the massive reduction in our stress, anxiety and fear.

There is so much we are learning and still have to learn, but we are no longer alone.  We are surrounded by other parents, professionals, educators and, most importantly, people who share our daughter’s neurology, those who are Autistic and who continue to share their experiences with us so that we might better parent our Autistic daughter.  And of course, our daughter, Emma whose patience, love, wisdom and endless compassion is teaching us more than any.

One year after the diagnosis