I have the bladder of a camel.  Only now that I think of it, this may be factually incorrect as I’m not certain camels really do have exceptionally large bladders, for all I know, they just pee where ever they are because they can, and that I’m confusing this with the fact that they go for long periods of time without drinking water, but that first sentence has a certain power to it and it gets the point across.  Okay, moving right along here…

Allow me to explain.  Both my children have, it appears, inherited my ability to not pee for inordinately long periods of time.  I can also go for long periods of time not drinking any liquids, coupled with my excruciatingly slow metabolism I could basically out live anyone should I ever be stranded somewhere, like a broken elevator, where there was access to neither.  (Oh I know.  Welcome to my mind.)  This ability to go long periods without having to pee comes in handy: long car trips, aversions to using public restrooms, and sleepovers at our cabin.

I’ve mentioned our cabin before.  It’s a rustic, one room log cabin, which my family built (literally) in the late 70’s.  It has no electricity or running water.  There is a sink with cold water piped in from the creek that runs nearby, but I think we turned that off and since no one lives in the cabin, it’s not something we bother with.  My father dug and built an open sided outhouse just up the mountain.  The outhouse is far enough away that you definitely do not want to try to go there in the middle of the night or at any time of the day or night during the winter because of the snow drifts, unless you’re wearing neck high gators.  Trust me, post-holing up the mountain at 3AM, while trying to locate the outhouse because you forgot to bring a flashlight (and toilet paper) in below zero temperatures to pee is not a good idea.  I speak from experience.

I think I look forward to sleepovers in the cabin as much as Emma does.  Last night was our designated sleepover night.  After unpacking our things, sweeping out mice droppings, cobwebs, dead wasps, opening the windows and airing the place out I realized I hadn’t peed before leaving my mother’s house.  “Hey Em, do you have to pee?” I asked, figuring I’d take her with me, since I was going to make the trek to the outhouse anyway.  “No!” Emma said emphatically.  So off I went while contemplating the positioning of the outhouse, its considerable distance from the cabin, how inconveniently located it was, how Richard AND Nic have never even used the outhouse, how only a man would build an outhouse this far away and while it was certainly positioned in such a way that one could appreciate the view as one sat in it, how many people were seriously going to do that when it was freezing cold or in the middle of the night?  No, I concluded, this was the sort of outhouse only a man would build and then never use.  And then I bushwhacked my way back to my family.

Which brings me back to my bladder and the ability I, and both my children, have  in not needing to relieve ourselves for hours on end.  It’s a gift, pure and simple.  One that I was particularly grateful for last night, knowing that not only would Emma not require me to accompany her up the mountain at some ungodly hour, but that I would not need to go either.

It’s important to contemplate these things.

Bucks – there were three of them, but I was only able to capture two, the third is just to the right. 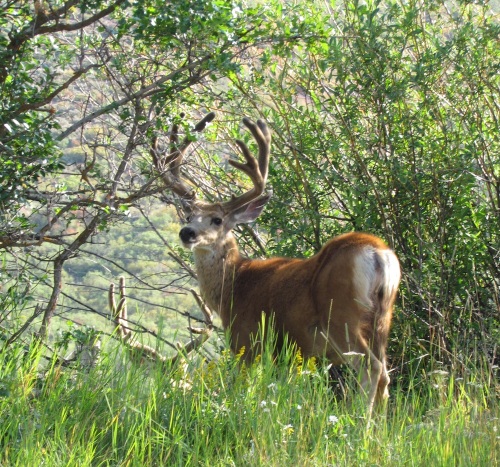 View of our ranch 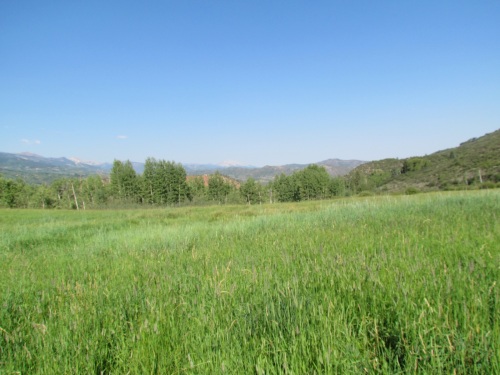 Emma heading up to the cabin

View of the Rockies from the cabin’s porch