I was alerted to an article written by Dr. Michael Oberschneider entitled, Ask Dr. Mike: Expecting and Anxious About Autism.  In the piece he writes, “Some of the happiest parents I know (both personally and professionally) have children on the Autistic Spectrum.”  In the comments section people weighed in with their thoughts.   Many parents wrote of their outrage (and a few of their disbelief) that Dr. Mike suggest “happy” parents of Autistic children even exist.  They seemed to equate happiness with a lack of concern.  A number of parents suggested that Dr. Mike was simply wrong and refused to believe that he could actually know such parents.  One person went so far as to suggest he was trying to trump up more clients, which is an interesting idea, but the logic of that argument eludes me.

Before I go any further, I have to say this – there was a time, not so very long ago – when I was one of those parents who was incredulous that anyone could be “happy” and have an Autistic child.  I no longer feel that way and the reason is, I stopped trying to cure my child of herself.  I feel sad that this was my experience.  I wish it hadn’t been.  I know it negatively affected my daughter.  I know it negatively affected my entire family.  I know now that the depression I felt was because I believed I could cure her.  I was angry, I was depressed, I believed that no one could truly understand.  I felt alone and isolated in my sadness and rage.  I was engaged in a war only to realize I was fighting myself.  I know this now, but I didn’t then.  I wish I could hit the rewind button and do it over differently, knowing what I know now.  But I can’t.  I have to move forward.  In moving forward I am aware that I owe it to my daughter to make a living amends to her for my past mistakes.  Mistakes that I cannot know and will never know how badly they impacted her. Part of my living amends to her, beyond trying my best to be the best mother to her (presume competence) that I am capable of is to counter the negativity and fear that continues to swirl around the very mention of autism.

Today I am one of those happy parents Dr. Mike mentions.  I have two beautiful children, one who happens to be not autistic and one who happens to be Autistic.  And yes, there are times when I worry about both their futures.  There are times when one of them does something or is going through something and I find myself concerned.  Concern is one of those feelings, like worry, that actually does not help my child.  These are things I feel and it is up to me to figure out what to do about them.  Are there actions I need to take that will help my child get through whatever it is that is troubling them or causing problems?  Are those problems something I can control or are they things that require patience, compassion, love and support?  What can I do to accommodate my child so that they might better cope with whatever is going on?

The single biggest issue I confront repeatedly with having a child who is Autistic, with unreliable verbal language, is the misinformation, the fear, the misperceptions and the ignorance of those who meet her and what they then assume because of what they see.  Fear coupled with ignorance = prejudice.  We fear that which we do not know or understand.  We make judgments, we believe ourselves to be superior, we then behave accordingly.  None of this helps anyone.

It makes me sad that I was once so unhappy and that I attributed my unhappiness to my child.  I know now this was not true.  It wasn’t my child who made me so unhappy, it was my perception of her and what I believed that meant that caused my unhappiness.  I assumed things about her that I now know are not true.  They are not fact.  What is true, what is a fact is this:  My Autistic child is far more capable than most people give her credit for.  My autistic child does not use language the way most people expect.  Through a great deal of hard work and over the course of many years my daughter is learning to communicate through typing.  She has proven repeatedly that she is not only aware of what goes on around her, but she is extremely intelligent and capable.  At the moment she requires support to communicate, though we believe she will not require that level of support in the future.

My happiness or unhappiness has nothing to do with either of my children or my husband or my marriage.  My ability to feel joy is an inside job.  It takes work to excavate all those old beliefs, to throw everything you think you know and believe and start over.  I encourage anyone who is suffering and believes their suffering is directly the result of their child’s neurology to examine their beliefs.  Throw it all out.  It isn’t serving you and your suffering isn’t helping you help your child.  Isn’t that ultimately what all of this is about?  Aren’t we all trying to be the very best person we can each be?  Isn’t that what we hope and want to model for our children?  Isn’t that the point?

April 2013 – With my beautiful friend Lauri, another “happy” parent 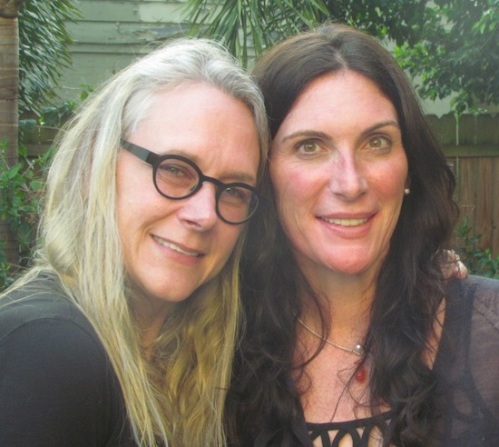