An Unexpected Response and The Importance of Trust

During my supported typing session with Emma Saturday evening we discussed Little Red Riding Hood.  I asked Em what she thought Little Red was bringing Grandma in her basket.  Emma typed “blueberries”, which seemed like a terrific guess, particularly as Little Red could certainly have picked them herself, placing each blueberry in her basket as she made her way toward her Grandma’s house.  We discussed the wolf and I asked questions I thought it likely Em knew the answer to, but that I wouldn’t expect her to answer verbally, just as Pascal, who is helping me, advised.  Eventually I asked, “Em, what would you do if you were asleep in your bed and woke to see the big bad wolf?”  To which Emma typed,  “I would go to the three little pigs house”.  Though she paused after she’d typed, “I would go to the”.  I urged her, “Take your time Em.  Write what’s in your head.”  She looked at me and whispered, “three little pig’s house.”  She then typed the rest of the sentence with me.  “I would go to the three little pigs house.”

I looked at that sentence.  It took me a second and then I laughed and said, “Wow Em.  That is such a great idea!”  After all the three little pigs have had run-ins with the wolf.   They know, better than anyone, how to deal with him AND they figured out how to build a wolf-proof structure after much trial and error that the wolf cannot break into and where they are safe.  Emma grinned at me and then, very sweetly, patted my cheek.  I took her loving gesture as a sign of her encouragement and patience with me.

Supporting Emma’s typing is not easy.  It is actually much harder than I imagined it would be.  I am pretty sure Emma spoke the last four words of that sentence because she was not able to trust that I was able to support her well enough to type that.  I think she sensed my hesitation.  I had no idea what she was trying to type and because I am not well trained and am very new to this, my support varies and is not consistent yet.  I am hoping I will learn and be able to give her the support she needs to flourish and eventually type independently.  What is fascinating about FC (facilitated communication, more on that ‘here‘ and ‘here‘) is that had I asked this same question of Emma and expected a verbal response, I do not believe she would have given me this answer.  If she had, I would have been absolutely blown away.  These are not the types of things we have been able to “talk” about.  Typing is giving her the tool she needs to be able to express herself in a way that has not been possible to date.

As an aside, two years ago we hired a woman who developed a literacy program for Autistic children.  While I have some serious misgivings about certain aspects of her program, the literacy piece is extremely well mapped out and it was what finally gave Emma the tools and practice she needed to learn to form the letters of the alphabet and began to read, write and type.  Now two years later as a result, Emma is reading and writing at a second grade level, though it is probably much higher.  Emma was not taught through phonetics, in fact we never even taught her the names of the letters in the alphabet.  For two years Joe and I worked with Emma every day on her literacy program.  For more about that program you can read ‘here‘ and ‘here‘ or put the word “literacy” into the search box and everything I’ve written on the topic will come up (just be aware my ideas and views have changed pretty dramatically since many of these posts were written.)

I mention all of this, because I want people to understand that Emma did not sit down one day and begin typing in full sentences.  She did not suddenly pick up an encyclopedia and begin quoting from it.  I know there are those who have.  I wanted to pursue supported typing with Emma after going to the Autcom Conference this past October and meeting Pascal.  He was kind enough to speak with me about Emma and gave me some advice.  I didn’t know if she would be a good candidate for FC.  After all she has some language and typed independently with her two index fingers.  But I want her able to converse on a more sophisticated level.  It seemed to me, FC might be the method by which she would be able to do that.

I am always in awe of Emma’s patience with this world, with all of us, with me.  Her inner strength and resilience are incredible.  She has been ignored, doubted, talked down to, spoken of while she stood right there listening as though she were deaf, she has been misunderstood and treated as though she were incapable of understanding.  Were I treated this way I would be in a state of near constant rage, alternating with debilitating depression.  If any one of us were treated the way so many view and treat Autistic (whether non-speaking, marginally speaking or fully speaking) people, most of us would want to retreat from this world and lose all faith in people, even people we love.

I do not know how or where Emma gets the strength to greet each day with such cheer or how it is that she is so good-natured, kind and loving after all she has been through in her short life.  But she has and is.  I began this blog thinking it would be a document of Emma’s progress.  But in fact, this blog is a document of my progression.  I look back on entries made just a year ago and see how completely my ideas about Autism and my daughter have changed.  So much of what I thought and believed I no longer agree with or feel.  I have resisted the urge to delete all those past posts, because as horrified as I am by so many of them, I also know they are what I believed at the time.  My own journey is a reminder that we neuro-typical (not otherwise specified) adults can and do change, sometimes it just takes some of us a bit longer.

Me, Pascal, Richard and Em during our first “training” session 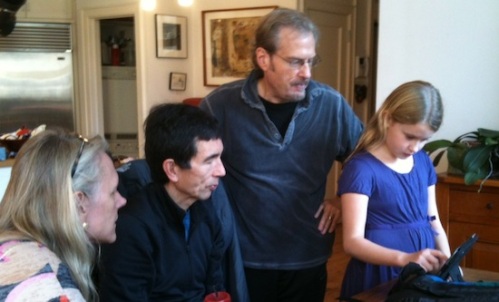 41 responses to “An Unexpected Response and The Importance of Trust”