Last night we walked up to our cabin for a barbeque.  I posted once before about our cabin –  “Zurcher’s Folly” dated July 5th, 2010 – it’s a one room, rustic cabin with no electricity, only cold running water and an outhouse just far enough away to make you reconsider the urgency, particularly if it’s in the middle of the night and you’re female.

A group of us made our way down the hill and over the stream that each summer the beaver dam up, and then up a little way until we rounded the bend and caught a glimpse of the cabin’s red roof.  Emma was ahead of us riding on the four-wheeler with my nephew, Bridger.

Em & Bridger Heading Out on the Four-Wheeler

Colter, my other nephew was leading the way in a piece of machinery I actually do not have a name for, but it looks formidable, with much of our food in the back.  It was a procession and Emma was ecstatic riding along with Bridger as the rest of us trudged behind bringing up the rear. 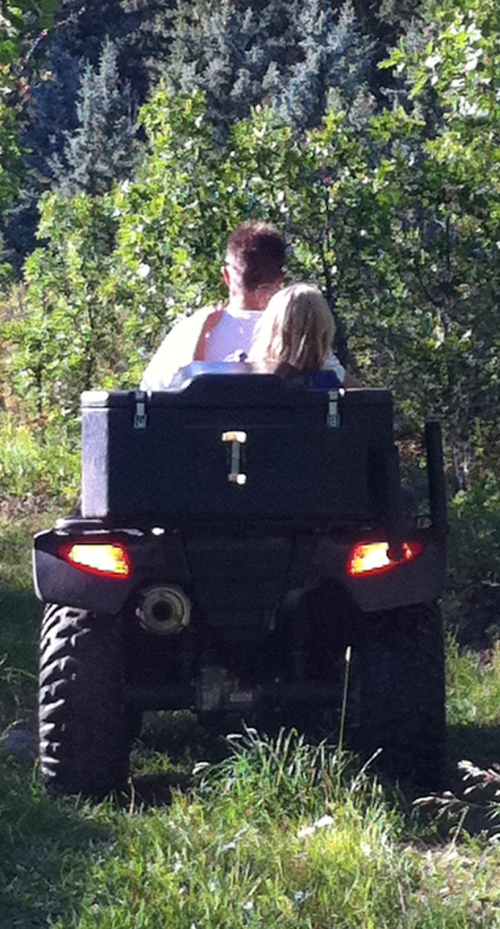 The Rest of Us on Foot 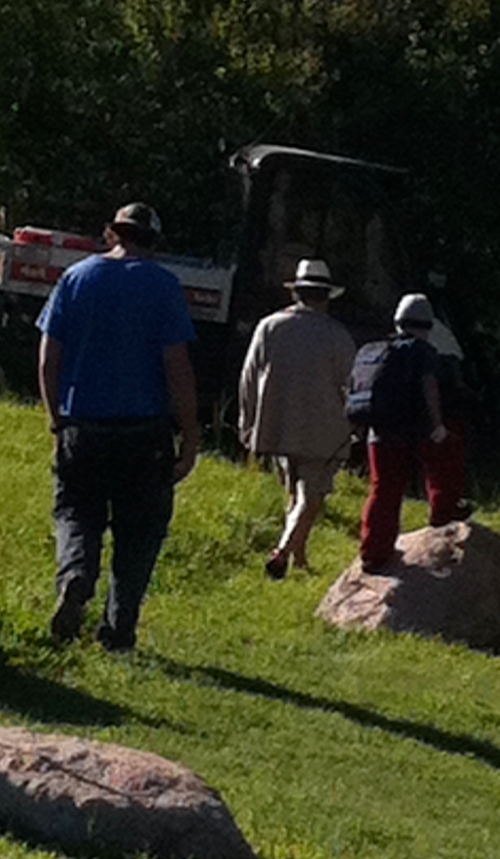 The dogs frolicked and fought over various sticks, pushing and shoving like small children, very nearly toppling my mother over on a few occasions.  As the cabin came into view everyone picked up the pace, dashing up the log steps and throwing themselves onto the now bare mattresses (they were once covered in quilts my mother and I meticulously made, but the mice got to them and now they are without) which serve as beds, sleeping two or three each.
“Have dinner?”  Emma asked, wasting no time in getting down to the essentials.

“You have to wait.  We’re going to eat together,” Richard said.

“Snack?” Emma asked.  It was good to see her father’s negotiating skills had not passed her by.

Then when none of us responded immediately she said, “Muzzy have snack?”  It was her killer instincts at work, going straight for the jugular.  What parent in their right mind could veto that?   Particularly as this was displaying everything we have dreamed of, attachment to a toy, pretend play…

“What kind?” Joe asked, never one to pass up an opportunity to get more language from her.

“Yes, but what kind of yogurt?  Do you want peach yogurt?  Blueberry yogurt?” Joe continued.

“Got it,” Joe said, rummaging around in his pack.

As Joe produced the vanilla yogurt, Emma sat down on the bench at the table, which occupies most of the floor space in the cabin.

She peeled open the foil cover and said to Muzzy, “Open wide!”

“Mmmmm…  all done.  Now it’s Emma’s turn,” she said, after pretending to spoon the yogurt into Muzzy’s mouth.

Emma looked at him.

By the time the coals were ready and the burgers and hot dogs grilled, Emma had eaten her entire dinner.  She sat with us as we ate, serenading us with her favorite songs.  At times she became caught in a favorite refrain and needed to be reminded she had already sung that part several times and it was time to sing something else.

“Go back to Granma’s?”  Emma said after awhile.

“No Em.  We aren’t going back until it’s dark,” Joe explained.

A little while later after we’d roasted marshmellows for our s’mores, Emma said, It’s getting dark!  Time to go back to Granma’s house!”

And with that she charged off as we gathered up our things.

When we were back at the house, Emma looked at Bridger, waved her hand goodbye and said, “Bye Bridger!  Thank you for the ride in the four-wheeler!”

Richard, Joe and I stared at each other in astonishment, literally with our mouths open.  This was unprecedented.  In the past we would have prompted Emma to say exactly what she said.  That she did it without anyone reminding her, entirely on her own, with terrific eye contact and waving her hand…

It was nothing short of amazing!

3 responses to “Emma & Our Barbeque”