Tag Archives: The Reason I Jump

“Rethinking Your Beliefs About Autism”

Emma and I are speaking at the upcoming icare4autism conference  here in New York City, July 2nd.  Over the weekend I asked Emma what she thought the topic of our talk should be.  She wrote, “Let’s talk about mind/body disconnect and how that makes people misunderstand someone like me…”

I told her I thought this was an excellent topic particularly as this conference will most likely not have an audience familiar with the idea of there being a mind/body disconnect or if they are, what that actually means.  In fact this is one of those topics I wish I’d known about from the beginning.  It would have been so helpful had someone explained to me, when Emma was diagnosed, what it meant.  Perhaps more than anything it is the body/mind disconnect that caused me to make all kinds of assumptions about my daughter, which I now know were incorrect.  Because she did not look at me or turn her head toward me when I spoke to her, I assumed she wasn’t listening.  Because she said things that I couldn’t understand or were disconnected from my questions, I assumed she didn’t understand the question.  I believed the words she spoke were the words she intended and meant.  It didn’t occur to me that I was wrong.  It didn’t occur to me that she was thinking a great many things, but had no way of communicating all that she knew and thought.

Both Ido Kedar and Naoki Higashida talk about how their bodies do not do as their brain requests.  Tracy Kedar, Ido’s mom, writes in the introduction to Ido’s book, Ido in Autismland, “Imagine being unable to communicate because you have a body that doesn’t listen to your thoughts.  You want to speak and you know what you want to say, but either you  can’t get words out, or what comes out are nonsensical sounds or the same embedded phrases you have said thousands of times.  Imagine your face staying flat and blank when inside you are furious, sad, or wanting to smile in greeting.”  Later Tracy writes, “Since you cannot express your thoughts, only you know that you are intellectually intact.”  And still later Tracy writes, “Imagine being stuck in an educational program, year after year, that is designed for a preschooler who learns slowly.  You are bored, frustrated, angry, misunderstood and more than a little hopeless.”

Emma has written about some of this before, but in the next month will be writing about her experience with the “mind/body disconnect” more.  I will be reading her thoughts and insights at the conference and adding my experience of what I once believed.  Emma will then answer questions from the audience time permitting, by writing on her keyboard.

I asked Emma what she wanted to call our presentation.  She wrote, “Let’s call it – Rethinking Your Beliefs About Autism”

And so we are…

When Words Don’t Reflect What is in the Mind

Imagine being asked a simple question, say a question about whether you’ve ever been to New Zealand.  Now you know perfectly well that you’ve never traveled to New Zealand, though you have a pretty good idea of where it’s located, however it’s not a place you’ve spent much time thinking about and it wasn’t even on your top-ten-must-travel-to-before-I die list.  But when you opened your mouth instead of saying, “No, I’ve never been to New Zealand, why do you ask?” all you could manage to say was, “Yes!” and not just a sullen sort of yes, but a happy, eager and enthusiastic “YES!”

So now the person begins talking to you about New Zealand and maybe they’ve just returned or they were born and raised there and they go on and on and then say, “What was your favorite place in New Zealand?”  Well, since you’ve actually never stepped foot in New Zealand this question is impossible to answer and so maybe you say “vanilla cake” because the one thing you know about New Zealand is that people are referred to as Kiwis and your only reference to kiwis is when you tried an actual kiwi once and didn’t care for it, but your favorite thing to eat is vanilla cake and besides vanilla cake makes you happy and this conversation is making you anxious because you said “YES!” when you actually meant “no” but things have moved on so quickly that you are feeling tremendous anxiety and wish you could just go somewhere away from this voice that is speaking so quickly about a place you’ve never been to nor have any interest in.

They look at you with that look, it’s a mixture of irritation and surprise, like they cannot decide whether you are purposefully making fun of them, or are tuning them out because you’re rude and have no manners or because you are actually hungry and are wanting to eat some cake.  So they give you the benefit of the doubt and say, “Yeah, well we can’t eat vanilla cake right now and anyway we were discussing New Zealand, so I’d like you to focus so that we can continue.”  Feeling frustrated and maybe even ashamed that they think you’re rude, you try to make a friendly overture by saying, “I like vanilla cake.”  But instead of smiling they look even more angry and so your anxiety kicks into high gear and you bite your hand to center yourself and because you are overwhelmed with frustration.

Suddenly all thought of New Zealand and anything else gets tossed out the window, because here you are biting yourself to center yourself and also cope with how frustrated you are, but all it does is make the other person furious.  You are so completely misunderstood and without the means to explain, you are caught in a web of other people’s assumptions.  “Stop it!  We do not bite!” the person scolds and maybe they grab your hand and hold it done at your side.  Their grip is firm, so firm, it actually hurts, and they look so angry that it’s scary too.  They are restraining you and glaring at you and all because your mouth wouldn’t obey your mind and said, “Yes” when you meant “no”.

I have no idea if this is what it’s like for my daughter or others who have what I call unreliable spoken language, but these are the kinds of scenarios I imagine and wonder about.  Is this what it’s like?  One day she will tell me, but in the meantime, there are others who are now writing about similar things, when their mind knows but their body is unable to do as their mind wants.  This is what Ido writes in his book, Ido in Autismland:

“… my mom asked me to hand her a bag.  I kept handing her a piece of paper the bag was near.”

“It happens less often now but it was common when I was small in my ABA drills.  I wanted to touch a card but my hand had another plan so I had to redo drills until my hand got it.  Not my head.  It knew everything.  My hand had to learn the drill. It’s something for the neurologists to study.  This is why so many parents think their kids don’t understand them.”

Naoki Higashida in his book, The Reason I Jump, writes:

“…as soon as I try to speak to someone my words just vanish.  Sure, sometimes I manage a few words, but even these can come out the complete opposite to what I want to say.”

What would that be like?  How would it feel to be completely misunderstood, your every action misinterpreted by someone else who believes you meant something that you did not?

Tracy Thresher types during a Q&A at the ICI Conference ~ July, 2013 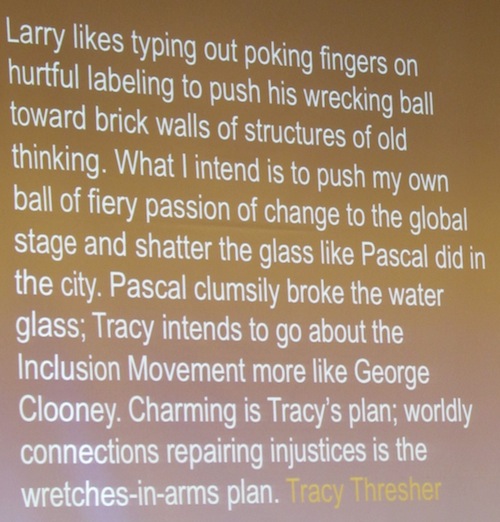