One month ago, on October 16th we began Emma on a GF/(modified) CF/ soy free and a great many other free diet.  This is our second go around with this diet.  The GFCF diet was the first thing I did when Emma was still two years old, to no noticeable change.  However, that first time she began eating a great deal of soy – soy yogurt being her favorite.  I was working with a DAN doctor at the time who tested her for hundreds of foods but never said anything about all the soy she was eating.  So after three months we took her off the diet and again saw no change.  This time I’m working with a naturepath/physician who also tested her for hundreds of foods.  This time, the list of foods to avoid was much longer than the first: cocoa, corn, potatoes, chicken egg whites, all red skinned fruits and vegetables, bananas, peanuts, onions and garlic.   Emma did not test negatively for wheat, but he advised we take her off it anyway, just to be safe.  Oddly, she also didn’t test negatively for sheep and goat’s milk, so we’ve allowed her to have sheep’s milk cheese, sheep’s milk yogurt and duck eggs.

Still we have witnessed very little change in Emma.  We’ve grown used to this.

I keep thinking I’m going to find something, something that other families have tried with significant results, but so far, other than Emma’s literacy program, we have not.  It’s frustrating to try various things and see little, if any, change.  As I’ve written before, we think we are seeing an increase in physical affection, but it’s hard to say this with certainty.  We have definitely not seen a profound change of any kind causing us to feel without a doubt that this diet has done anything.  Still I will give it more time.

Why some of these interventions work for some children and not others is something that’s been debated for awhile.  Why is it some children are mainstreamed after a few years of intensive 40 hour a week ABA, yet for children like Emma, they were not helped?  How is it that some children go on a GFCF diet and within days are transformed from a screaming, frustrated, incoherent child to one who is speaking in full sentences, playing with toys in an “appropriate” manner and displaying a never before seen curiosity of those around them?

It is easy to blame oneself, but I don’t believe that is the answer.  I know of too many cases where the parent has tried a great many things only to find their child did not respond.  I wonder whether it is the children who do respond, who are the exception.  While this thought depresses me, I have to wonder whether it isn’t more accurate.

For more on Emma’s journey through a childhood of autism, go to – www.Emma’s Hope Book.com

This is the story Emma made up and wrote this morning before she went to school. 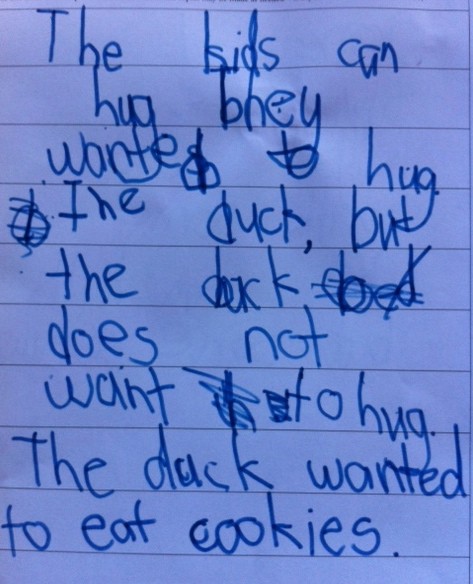 I had to give her support a couple of times when she would say a word, such as “the” or “to” but then would forget to actually write it and wrote the next word (always a noun or verb) instead.  According to Dr. Marion Blank, the woman who created the literacy program we have been using with Emma for the past nine months, children on the spectrum dislike non-content words.

Emma then took her story over to her dad and read it to him!

We first met Dr. Blank almost a year ago now.  Before that first meeting we both read her book “The Reading Remedy” and were impressed by it.  In January of 2011 we began implementing her program with Emma.  During those first few months we worked on the beginning of letter formations and sequencing.  In April Emma was able to form all the letters of the alphabet and we began the first level of the literacy program.  Over the last seven months Dr. Blank has added other elements to the program, specifically designed for Emma so that we now are working on a spoken language program in conjunction with the literacy piece as well as the Phonics Plus Five and Reading Kingdom programs.