Finding Ways to Connect With Other Human Beings

I have a relatively new friend.  We’ve been talking a few times a week.  She makes me really happy because she’s funny, smart and kind.  You know that magical feeling when you connect with another human being?  Someone who is special?  It’s a deeper bonding than with most people, you can’t explain why that is, you just feel it and it’s mutual.  I feel safe enough to confide in her.  I’m pretty sure she feels the same.   When we aren’t talking I think about her.  I wonder how she’s doing, is she okay.  And then one of us reaches out to the other and we start talking.  Only with my friend we don’t talk in the conventional sense, we type back and forth in real-time.  My friend reads very quickly, she’s hyperlexic; if I mention something that she hasn’t read, she’ll zip off and do a little research while I’m still typing out a sentence.  Then she’ll reply with the knowledge of someone who knows, but didn’t in the previous sentence.  It makes for an interesting conversation.

As a teen she had alexithymia.  Meaning it was difficult for her to use words to describe the emotions she was having, as well as understand other people’s emotions, which combined with her literalism, caused a great many problems.  So yesterday she was telling me about how she used echolalia and physical actions as a way to connect, but it didn’t always work out so well.  People misunderstood her.  And I thought of Emma.  Because Emma doesn’t have the language to describe her more complicated feelings.  So when she wants to connect, she’ll hit or she’ll say, “No, you cannot pull Mommy’s hair.”  Which means that she’d like to, but she knows she shouldn’t.  At her school she pulled her friend’s hair and was punished.  Emma knows this is something that while she enjoys doing it, the recipients often do not.  That must be very confusing to her.  Emma will say things like, “No you cannot pinch Mommy.”  Then she’ll look at me with a mischievous look and will wiggle her fingers at me as though she were about to pinch me.

Emma thinks this is the height of hilarity and will say again, “No.  You cannot pinch Mommy!  Pinch Mommy!” and then as though the feeling is too powerful for her to control, she will.

“Ouch!”  I will say.  And Emma will double over in laughter.

Last night we went out to dinner in town.  It’s very warm here, so we sat outside.  One of Emma’s favorite games is to pretend to give me a shot.  She “washes” my upper arm by rubbing it with her hand and then pinches me.   “Swish, swish,” Emma said, while pretending to put a band-aid on my arm.   “Now you do it,” she said, covering her eyes with one hand, while offering me her arm.  We play this game often.  It is also her way, I think, of working through her fear of having a shot or the finger prick they sometimes do at the doctor’s office.

Yesterday as my friend and I were talking I realized something else.  Emma is doing these things, punching, pulling hair, pinching, because she wants to connect, she wants to get a response, she wants to interact.  It’s not just a one-sided gesture.  She is trying, in the only way she knows, to make contact.  Sadly her gestures are often ignored or she is told no, she cannot do that, so she is then further limited.  She doesn’t have the words, she cannot always make sense of what she’s feeling, but she really wants to interact, to develop a method of “talking” with another person.  She’s doing the best she can with the limited tools she has at the moment.

I realized I needed to help her find physical ways to connect that will not be perceived as “harmful” by the other person, but that are also meaningful to her.  I will have to speak with my friend about this, because she will undoubtedly have some good ideas, besides I haven’t spoken to her in at least 16 hours and I already miss her. 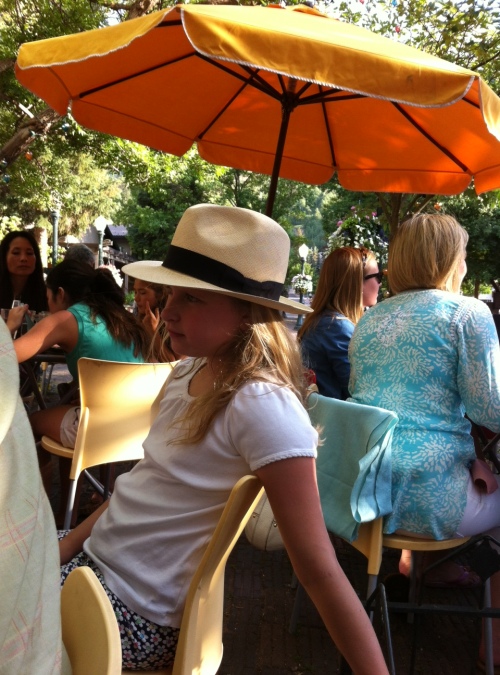 This morning – sunrise on the ranch