An Argument Against Pathologizing Autism – What Others Had to Say

In yesterday’s blog post I asked for thoughts regarding the pathologizing language that dominates most conversations about autism and those who are Autistic.   I received some terrific responses both here, through email and on Emma’s Hope Book Facebook page.  I also asked Emma for her thoughts, which she very patiently gave me and generously said I could post here.

Emma wrote, “Deciding autism is a medical condition eases the minds of those who profit from it.”

A couple of great links were sent to things that have been written on the topic or related topics.  This, from the Zur Institute entitled:  DSM: Diagnosing for Status and Money, focusses on the DSM and argues, “Historically, many clinicians have been unaware that the DSM is more political than scientific, that there is little agreement among professionals regarding the meaning of vaguely defined terms, and that it includes only scant empirical data.”

Another link sent was this one, Time to let go of the medical model by Jarrod Marrinon, which does not speak specifically about autism, but is certainly still relevant.

And this link from Nick Walker’s blog, Five Steps Toward Autism Acceptance is terrific with the first step being, “De-pathologize autism and Autistic people.  This, in particular, stood out, “Blind people, Deaf people, and many other disabled people get the services and accommodations they need without being labeled as having mental disorders. We don’t have to call autism a disorder or a disease to acknowledge that Autistic people are disabled and can require accommodations.”

Nick’s words were similar to what Emma wrote when I asked, “What do you say to people who need support and assistance in their daily life?”

“Why should they have to fight anyone to receive the help they need to live?”

I said, “Well, in an ideal world they wouldn’t need to, but some say that there is only so much money and available resources, so people need to prove that they need the help more than others.  In effect they are being forced to compete for the money that’s been allocated.

Emma wrote, “This sounds like an excuse so that people who do not need help can feel better about how others are treated.”

David wrote, “The obsession with behavior as the be-all-end-all of autism “science” and “treatment” is a superficial distraction and a formula for spectacular failure in addressing the underlying realities – both impairments and abilities alike – which Autistics experience and must cope with every minute of every day. The temptation to pathologize and treat behavior for its own sake is dangerously misleading and utterly beside the point. That boilerplate approach to autism HAS GOT TO GO.”

“Are there any studies showing the direct links to pathology language and harm and abuse of the people who are being pathologized?”

To me, it’s self-evident and obvious that groups that are pathologized on the basis of their way of being are harmed and abused in consequence.

“If we do not pathologize autism how will the people who require assistance receive it?”

On a massive, massive scale, the adult autistics who require assistance are either receiving no assistance whatsoever, or the meager assistance being received is grossly inadequate if not downright harmful.”

Toddynho goes on to say, “What we have is a society that is pervasively pathological. Addressing the most acute societal pathologies will improve things for autistic people broadly much more and much faster than any kind of autism-specific “assistance” strategies ever will — and moreover will make things a lot better for most non-autistic people too.”

Gregg wrote, “Its a false logic really. There is nothing inherent to medical model understandings of Autism that enables support. Just the opposite really Its well documented that social model understandings enable supports that are far more useful to autistic people. I see no value in pathologizing Autism except to the industry that has been built up trying to take advantage of parents of Autistic kids.”

I believe the medical model, which is the model used in almost every university and by most autism professionals does tremendous damage to the very people they are intent on “helping”.  To repeat what Toddynho wrote, “…it’s self-evident and obvious that groups that are pathologized on the basis of their way of being are harmed and abused in consequence.”

“Do you think pathologizing language is harmful?” I asked Emma.

Emma wrote, “Justifying decisions to ignore those who need help is not reason to make people feel ashamed of their existence.  People need encouragement to do good.  There will always be some who cannot, but this is not a good reason for everyone else to stop helping each other.” 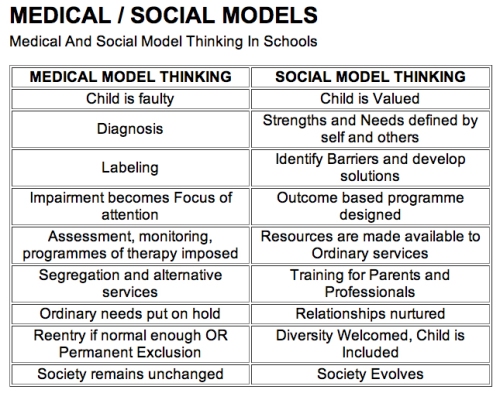