Last week I wrote a post, Speaking vs Typing, which sparked a terrific discussion about language, communication and how we interpret what others say and do.  My friend Barb, who wrote (with Lois Prislovsky) the not-to-be-missed book, I might be you commented:

“my dear neurotypical friends, first, let me say i love that you all are putting your heads together to break down this truth into practical ideas to help me and my autistic peers who struggle mightily with spoken language communications. em is right, “language is an awkward way to communicate” and i argue that is true for everyone but highly challenging for those of us who are autistically wired in the “vanilla cake” or “mail truck” way that em and i are. it took me years to think in language. but prior to that my thinking was not faulty it was just not language based. thinking in language is not efficient for me. i wish i could give you a pretty little fact package about what works so folk like me could get such treatment and soar socially and academically. of course, the problem is…it is hard to say in language. typing makes it way easier, because i can control the speed of each thought and break it down to smaller parts to be better described by letters one peck at a time. speaking requires a rather unnatural process for me perhaps like you singing a song you heard in another language. u may be able to imitate the sounds but the meaning in each mimic is not precise. since most folk are not yet well practiced in telepathy the best way for me now is to communicate through typing. but still my thinking is not easily translated in to words. feelings, sensations, visions and perceptions that are cleanly processed in my mind dont fit well into letter symbols. there i said it – or something close. thanks for caring. trying b”

Barb’s comment made me wonder whether my daughter is able to “hear” my thoughts, even if just a little.  And that if she were able to, it would make sense that either typing or speaking would feel like an inferior, less efficient form of communication, perhaps it would be viewed as somewhat barbaric, and certainly a less sophisticated way of communicating.  So I asked her, “Can you hear my thoughts?”  To which she answered, “No.”  Not undone, I asked, “Do you feel them?”  To which she did not reply.  This post is not about mental telepathy, but is more about how we sense each other.  Some of our senses we are taught to fine-tune and others society either doesn’t recognize or doesn’t place as much importance on.

But what if we lived in a culture that did encourage sensing another’s presence and feelings?  What if, from the time we were born, our sense of other people’s state of mind, their feelings, was nurtured.  Would that change how we communicated with each other?  What if spoken language took a back seat to our intuition?  What if we lived in a society that placed more importance on our presence, than on our words?

All of this reminded me of a conversation I had with a couple of friends, both of whom are Autistic, about disability and society’s role.  I wrote a post about that, ‘here‘.  One friend said that if we lived in a world where everyone used a variety of alternate forms of communication, where a longer time period was allowed and expected between words, and supports were anticipated and provided, then people who do not speak would not be considered disabled, just as I am not considered disabled because I cannot juggle or jump as high as an Olympic high jumper.

If children were taught at an early age to sense each other without relying on language, would we evolve into a species where language was viewed as unreliable and untrustworthy?  Does my daughter view language as a lesser form of communication?  Is she not as motivated to communicate, either through typing or verbally because her other senses are more finely tuned?  Does motivation even enter into all of this?  My brain is constantly looking for intent, motivation, but what if this isn’t what’s going on at all?  What if this has nothing to do with any of that?  What if she is trying so hard to communicate by typing and speaking because she understands I want her to, but not because she has the same need that I have?  Does music call to her because it is less about the lyrics and more about the beauty of the music, the feelings the music evokes?

Is all of this way too esoteric and ethereal? 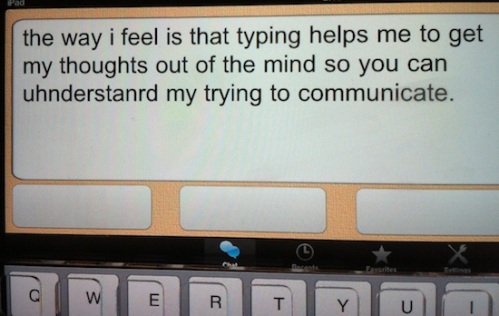 39 responses to “Sensing Another”