A day in photos…

Entrance to Church of All Nations

Mount of Olives (A massive cemetary)  As I climbed the narrow street along the cemetary, a man with a donkey appeared.

Tree of Thorns outside the Dominus Flevit Chapel

Dominus Flevit Chapel (“The Lord Wept”)  The dome designed in the shape of a tear drop as Christ was said to have sat nearby and wept over the fate of Jerusalem.  David, the nice gentleman who allowed me to come into the Chapel, despite the fact they were closed to tourists said, “You may sit here out of the hot sun while I feed my dogs.  If you like you may say a prayer.  Just don’t cry.”  To which I said, “Thank you so much.  I’ll sit right here,” I pointed to a little wooden chair.  “But I’ll save my tears for that scary looking tree you pointed out earlier.”  He laughed and left me to care for his dogs.

Archaeological Site in Front of St. Anne’s Church  Just to the right are stairs descending to the Pool of Bethesda where Christ is said to have carried a paralyzed man and cured him.

Kitty – A great many cats running wild in Jerusalem.  Most are pretty mangy looking, but this one was particularly cute.

A Side Street off Via Dolorosa – Notice the red neon tattoo sign.  A perfect example of the meeting of ancient and modern

YMCA (Pronounced “imca”) Built in 1926- 1933 by the same man who created the Empire State Building, Arthur Loomis Harmon, Jerusalem’s YMCA is a wonderful example of embracing differences, working together to create something larger than any one group, religion or people.  The auditorium beneath the dome has lighting fixtures each illuminating a different image – the star of David, the cross and a crescent. 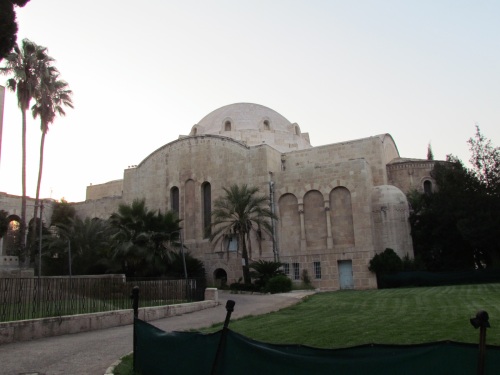 9 responses to “Jerusalem in Photographs”