For Emma’s birthday, Joe gave her a video montage with Michael Jackson’s incomprehensible song – Wanna Be Startin Somethin – playing in the background.  Emma loves playing the DVD and calls it – “Thriller.”  Despite our corrections, she is resolute.  Saturday night she put the DVD into the player and then said, “Halloween!” and ran to the costume chest.  “Want to put on halloween costume?”

“But, Emma it’s not halloween,” Richard told her.

“I think she wants to put on a costume like she does on halloween,” I said.

After a good bit of rummaging around, Emma pulled out a costume, ran to her room and several minutes later burst forth wearing this… 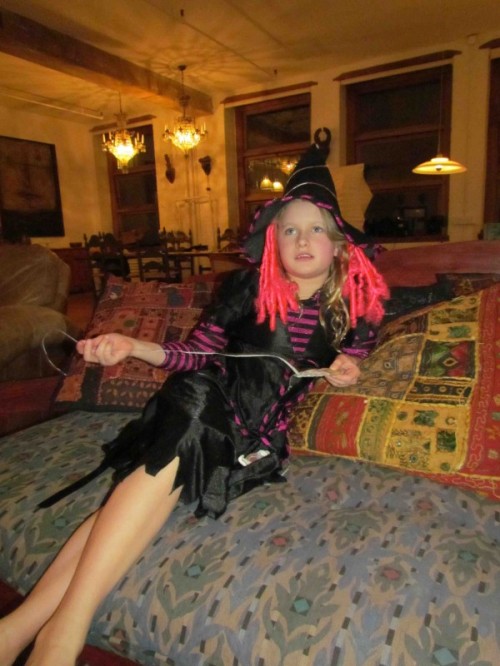 “Watch Thriller,” she announced before settling down on the couch to watch the video montage Joe had put together for her.

*Just in case anyone is curious, we correct Emma when she makes these types of grammatical errors.  For example in the above comment, I said, “You want to watch your video?”  To which she responded, “Yes, I want to watch my video.”  With repetition we have seen an enormous uptick in Emma’s spontaneous language as well as an increase in her ability to say grammatically correct sentences without our intervening.  The pronoun confusion, while still present, has gotten much better as well.

Richard and I have a running joke regarding MJ’s lyrics, something neither of us can understand without printing out the actual lyrics, still, as a nod to our advancing years, we use phrases like “new fangled” and “these kids” while shaking our heads.  Thankfully Richard finds all of this as humorous as I do and we have each come up with obviously ridiculous lyrics, which we then suggest are the actual lyrics.  “Do you think he just sang, go to the post office?”  “Yeah, post a letter, I’m pretty sure he just sang that.”  So I wasn’t surprised when Richard said at one point, “He just said, “You’re a vegetable.”

“I am not!” I responded with feigned indignation.

“No.  Seriously, I think he just sang, You’re a vegetable.”

“I’m being serious.  Do you think that could be part of the song?”

“Oh yeah,” I said with an exaggerated tone, “You’re a vegetable.  I think that has to be right.”

Richard looked at me.

Meanwhile, Emma continued to bop her head up and down as she watched the slideshow of photographs from the past year of herself, that all of us have taken, wearing her witch costume.

For more on Emma’s journey through a childhood of autism, go to:  Emma’s Hope Book