I rarely have the opportunity to post anything about Merlin, our beloved kitty, because Emma routinely ignores him and this blog is about Emma and autism.  Despite the fact we got Merlin because of increasing pleas from both children.  Nic was lobbying for a dog, while Emma kept saying things like – “Go to pet store, pet the kitty?”  and “go to animal shelter, bring kitty home?”  Richard, a self-professed “dog man” was adamant – No CATS!  As I too, much prefer dogs and felt his argument about the care required in having any animal was more than we should voluntarily take on, I agreed.  However a few months later, Richard said, “Do you think we should get the kids a cat?  Emma seems to really want one.”  I smiled and tried not to nod my head too enthusiastically.

On the designated day, we went to the animal shelter together to choose a kitty.  Several hours later we returned home with the aptly named Merlin.   I went to the pet store to buy the essentials, including a soft cat bed (which he refused to sleep in.)  Merlin, being a cat who knows a thing or two about survival, immediately glommed onto Richard as though he were the anchor to his ship.  Wherever Richard went, Merlin was within a few feet.  By the second day Richard was extolling Merlin’s virtues, by the third day it was all over, Merlin and Richard were inseparable, it was love.  Ironically, the children, who after all were the ones vying for a cat to begin with, appear to have little more than a passing interest in Merlin.  Emma continues to say, as we pass a pet store, “Go in and pet the kitty?”  It seems she is only interested in petting other people’s cats, which we have found baffling.

Then this past weekend Emma found a stuffed cat I’d bought for the children after my cat Bertie of over twenty years, died.

“Yeah.”  And for the rest of the morning Emma carried the kitty and her string with her wherever she went.

I keep hoping this affection for the stuffed kitty will translate to the real kitty, but so far it has not.  Still, I can now post this adorable picture of Merlin, who has finally decided he likes his cat bed after ignoring it for two years.   And who knows, maybe some day Emma will fall in love with Merlin just as the rest of us have. 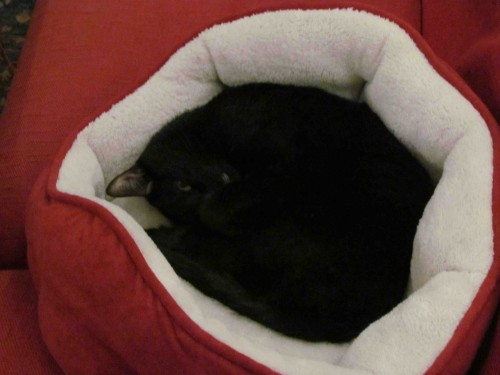 This entry was posted in Autism, Parenting and tagged Autism, autistic, Parenting, pets. Bookmark the permalink.