Richard, Nic and Emma finally arrived in Aspen after a series of mishaps Thursday evening.  Emma saw me first and ran, as though heading for my arms, but at the last second, veered away, saying, “Hi Mommy!  It’s Mommy!”  and jumped up and down, pointing at me from about five feet away.

I caught her and said, “Hi Em!  Remember, arms around and squeeze!”  Which she did as I kissed both her cheeks.  I have been working with her on the art of hugging family members and though she hasn’t got it down yet, she at least understands that if you put your arms around the other person and squeeze, that will pass for an acceptable hug.  It’s a start, anyway.

Richard and Nic, on the other hand, returned my embraces easily and without hesitation.   This is my family and I am ecstatic to have them here with me through the holidays.

While we are here, Em is skiing with a buddy provided by Challenge Aspen.  (Except for today when it is so messy out with rain, slush & snow even Emma seemed less than enthusiastic.)  “Look!  It’s raining!  We cannot go skiing when it’s raining,” she said upon waking up this morning.  “That’s just silly!”  she added, pointing out the window at the rain.  And indeed, it did seem to be a bad idea, though there were the intrepid few, who defied all logic and were on the slopes, my brother and his wife being two of them.

I am relieved Emma was not among them, however, as the patches of sheer ice, mixed with the slush caused by the milder temperatures and rain, made for some interesting driving along our road.  I can only imagine what the skiing was like.

“Would you like me to read to you?” I asked Emma earlier this morning.

“Yes,” she said, sitting between my legs on the couch usually taken over by the dogs.  Emma pulled a blanket over us and leaned her head back against my chest.  I have been reading Balto, the Siberian husky whose statue forever memorializes him in New York City’s Central Park.  Emma, despite her fear of dogs loves the statue in Central Park and often climbs on it, as the photo below shows. 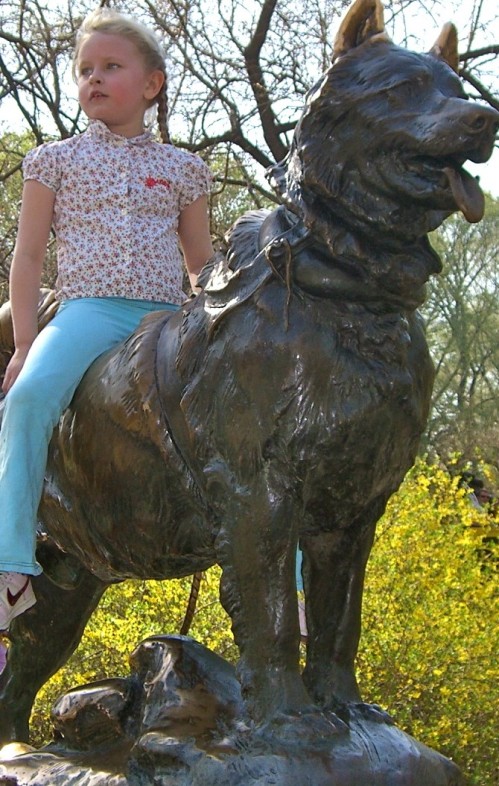 Emma seemed to enjoy the story and listened quietly as I read the last twenty pages to her.  When we finished the story, she looked out the window and said, “No, not going to go skiing!”  Go swimming at the ARC.  Go jump off the diving board into the cold water!”

“Go swimming now,” Emma said.  Upon seeing my hesitation, she said, “You have to ask Mommy.  Mommy!  Can I go swimming at the ARC?”

“You have to wait, it’s broken,” she said, looking at me to see if she’d gotten it right.

“It’s too early,” she said.  Then she peered out the window at the morning light and said, “You have to wait til it’s light out.”

“No, Em.  It’s light out, see?  We can see the mountains, but it’s too early for the pool to be open.  People are just waking up and having breakfast…”

“Later,” Emma said, clearly not interested in my long-winded explanation.

“More than one minute,” I said, wondering if I should use the opportunity to bring over a clock and discuss the concept of time.