On the Topic of Violence…

On the topic of violence or actions, that by those witnessing, appear violent, actions that harm another or oneself, there is one thing that stands out, one thing every single person who has physically harmed themselves or another person have all agreed upon, and that is the need for a self-appointed safe place.  Not a place chosen by another, which can too often be seen as punishment, but a place that the person who is overwhelmed can go to, a place that feels safe.  A place that is sacred, that will not be violated; a place that is a safe haven.

From reading the numerous comments, emails and DMs people have sent over the last few days, it is the one thing every single person has agreed upon.  (If you’d like to read the other posts on this topic click ‘here‘, ‘here‘ and ‘here‘.)  And interestingly, not only a safe place for the person who is feeling overwhelmed and whose actions are harming others and/or themselves is needed, but a safe place for all present, those who either by chance or because they are trying to defuse the situation, is necessary.  A number of people have asked, but what if my child follows me or is breaking things and is a danger to themselves?  Again a number of people answered this question with the same answer.  They all said that in such cases it will take some time, repeatedly moving to a safe space, being followed, and leading them back to their safe space.  Every single person said that talking, reasoning, arguing, placing demands, insisting that the person “use your words”, telling them to take deep breaths, demanding they count to ten are uniformly unhelpful, and in most cases, cause the person more distress and further upset.

Another aspect to all of this is escalation.  Lots of people have described how they escalate or their child does.  One wrote about a child who had 8 escalation levels and that “if he gets to 4, they’ve lost him.”  They wrote that “most kids have at least 2 before they get to the attacking stage.”  They described one child whose first level was so subtle, many did not even notice or pick up on it – a heavy sigh.  Another parent wrote about a certain look the child gets, a stare off into space that they now know means they must get them to safety.  All agree that catching it before things escalate is key.  This is something Judy Endow talks about in her book, Outsmarting Explosive Behavior.  She describes “the four stages of explosive behavior: Starting Out, Picking up Steam, Point of No Return, and Explosion.”

Ari, who is non speaking and has a blog, Perceptions, described in detail what things help and what does not.  He wrote, “Am autistic and nonverbal. Never speak. Use devices with pictures mostly, but can type (sometimes). Have been violent. Usually only when people around me have problems below.

Problem #1. No one thinks to get one of my communication devices, switch to meltdown page, and put it in my hands to see if I could use it. Communication is hard. Some times I need be helped to use picture buttons. I have a page specifically for pre-meltdowns. It never gets used.

Problem #2. Blocking me, restraining me, pushing me into a corner, or otherwise making me feel trapped is not okay without my advance consent. Can follow me, stay close enough to see what I do or where I go, but let me go. Walking is calming. Non-autistics get to walk when stressed, why not me too? Trusted friends get my permission to touch my arm to guide me in safe walking direction. So much easier when there is trust and respect.

Problem #3. I hit myself, pull my hair, scratch/cut my skin, do other harmful things. Very rarely is done hard enough to cause serious damage. I understand it is uncomfortable to watch, but interfering will make me hurt myself far more. If you cannot bear to see this, leave and call someone else who can instead of interfering with my efforts to calm myself.

Problem #5. I admit there are times when I cannot calm myself, they are rare now but still can happen. There are acceptable ways to protect me (and others) from harm.  It usually involves medication, thick soft blanket, silence, darkness, patience, and ice. If person can resolve #4 with me, I am happy to discuss #5. Otherwise… Energy is not infinite, left alone I will eventually stop screaming and fall asleep. There may be blood. I will not die. Ice for my head when I am done is much appreciated. This is when I am most likely to get violent towards others. I know it is scary. I know. For me too. If unsure of what to do, just stay away from me, be quiet, wait for calmness. I will look for help when I am ready.

#5 usually happens because of problems #1-4. It is best avoided.

Last time was about 1 months ago in a hospital waiting room. I am 31 years old legally independent adult (whether I should be is another matter entirely). I just needed to walk. Instead I was pushed into corner and trapped until doctor called us into private room. If had been restrained longer probably would have hit person hard. Probably would have been charged with assault. Probably sent to psych hospital again. This is not my fault. I can not fix this. But at least it has taught me self control. I can endure incredible amounts of pain/fear/chaos without reacting, now. I did not hit her.”

I asked Ari what he meant by “medication”.  He responded, “Only medication now is ativan. Had haldol many years ago and it worked better for #5 situations. But not good for anything less intense, unlike ativan. Need better. But no doctor good with this. So get no help finding better. Need body sedation, sensory pain away, fuzziness from situation, to for logical thought processes work again so can calm self.”

He then added:  “Broken logical reasoning ability. In those moments, no logic. Only chaos.”

A parent wrote:  “People have seen it and have threatened to call the police (when he was five!) or worse.  I really didn’t know what to do because he would get so upset and frustrated.  People said to put him in therapy, but the thing I did that saved us was I put our whole family in therapy.  We learned to communicate with him in ways he understood.  We learned that we weren’t always right in how we handled it, and we often made things worse.  We learned to find effective problem solving solutions (mostly following The Explosive Child by Ross Greene) It really made a huge difference and he rarely has violent meltdowns now.  When he does, I have to step back and ask myself what was going on, was I not listening to him?  Was I placing too many demands on him?  Was I not allowing him to effectively self advocate?  He always says to me that he doesn’t want to do it, he just is so frustrated and has a hard time communicating and identifying his feelings. We are still a work in progress, learning together how to understand each other.   I KNOW he doesn’t like it when he is violent, but he is doing the best that he can with the tools we give him.  I know this because he tells me, and because I was also a violent child.  My target was my younger sister sometimes, but mostly myself.   I was beyond frustrated and felt completely powerless due to the environment in which we were brought up.  I know I am doing better with my son than what I grew up with, but there are times I screw up.  I had to relearn everything I was taught about children, about communication and about respect.  I had to learn that “noncompliance” is really just self advocacy and that it’s actually a positive character trait!   That has made all the difference.  I really believe that kids do the best that they can with what they have to work with.  Kids who are violent are frustrated and need our help to find their voice.”

If any of you know of other blogs, articles that have been helpful or are writing something on this topic, please send the links in the comments section so I can include in future posts.  I may need to make a separate page for all of this…

“People Have to Listen”

Stop Hurting Kids is a campaign to “end restraint and seclusion abuse in schools.”  Restraint and Seclusion: Hear Our Stories is a 27 minute film by documentary filmmaker, Dan Habib.   Creator of Including Samuel and Who Cares About Kelsey?  Dan Habib is “Filmmaker in Residence at the Institute on Disability at the University of New Hampshire.”  The transcript of Restraint and Seclusion is available here.

For those of you who do not have the time or inclination to watch the film, here are a few quotes from it, which I hope will serve to pique your interest enough to watch the film in its entirety.  Because this is happening all around us, because this could be one of our children, because we, as a society, must become aware of what is going on, because without awareness and protest this will continue, because prejudice and brutality are not the answer, because as Barb Rentenbach continues to remind us, I might be you, because as my daughter, Emma has said on numerous occasions, “People have to listen.  Mommy, people do not listen to Emma.”

“The National Disability Rights Network reported that in recent years, the misuse of restraint and seclusion has resulted in hundreds of deaths and thousands of injuries.”

Peyton Goddard – “It was bruted power jired by purses wrongfully called teachers trying to beat I. This war wasted my rest. The sweet in I evaporated out.”

Helena – “He slammed me up against the wall, arm barred me across the throat and lifted up so I couldn’t breathe. And then whispered, “How am I supposed to talk to you nice and slow so you can understand?”

Wil Beaudoin – “One particular day we went to see my son and we were going to give him a haircut. So, we took off his shirt and he was covered with bruises and abrasions, fifteen to twenty on his body…everywhere.”

Peyton Goddard – “Fright opted I timid, silent and unable to fight back. Telling myself sweet lies that the tortures did not matter.”

Brianna – “I did not have a speech-generating device. Good evaluation would have made that happen. I tried to tell my mother. She did not understand me or she thought the teachers knew everything.”

Peyton Goddard – “Try to see potent powerful potentials in each pierced person. There you will free their gifts. There I can feel I’m treasured. There nary I’m fret. I’m ready. Are you? Try please.” 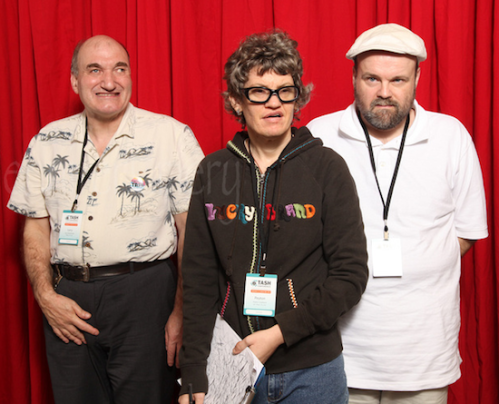