Sometimes it Takes Someone Else to Believe

This past weekend Em and I went to stay with my friend Bobbie on Fire Island.  I wrote about all my worries and concerns at length in a post last week that I’ve linked Bobbie’s name to in the above sentence.  It was a really long list of What ifs.  I knew if things got to be too much, Em and I could always head back to the city by ferry and then train.  I had a plan B.  I was prepared.  Fourteen years living with Richard, the ultimate boy scout, seemed to finally have worn off on me.  I packed lightly.  I had my computer, my iPad, a book, Douglas Biklen’s Autism and the Myth of the Person Alone;  I printed out stacks of scientific papers by the neuroscientists, Kamila and Henry Markram as I will be interviewing them in Jerusalem in another ten days and because this is what constitutes “light” reading for me.  I brought a variety of highlighters and pens and pencils and my camera.

Emma insisted we bring ten of her books, which I tried really hard to talk her out of, but that she finally convinced me she couldn’t be without.  We had more books and technological devices with us than clothing.  Never mind, I thought to myself, it’s hot, we’ll be living in our bathing suits.  And then Bobbie was outside and we ran downstairs, piled into her car and headed off on our little adventure.   By the time we arrived in Fire Island it was afternoon.  There are no roads so all the homes come with bicycles.  You drag your things from the ferry in a little cart, which you then unload and leave the cart and bikes outside your house.  Inside children ranging in age from 4 to 14 raced around and adults ranging in age from their late 30’s to late 60’s chatted.  Emma was in her element.  She loves nothing more than a house bustling with people and lots of noise.

The ocean beckoned, but Emma caught sight of a swimming pool on someone’s deck, “Go swimming in the pool?” she asked pointing to the neighboring house.  I explained that this wouldn’t be possible, though I could tell Emma remained unconvinced and when Bobbie told us there was an Inn just a few houses away with a big swimming pool, it was decided.  Off we went with Bobbie’s daughter Mina, who is exactly the same age as Em.  We  jumped and splashed and played “chicken” where the girls sat on our shoulders while they tried to push each other off.  There was lots of laughter and squealing with excitement and delight and I had a moment when I realized I was laughing and Emma was laughing and Mina was laughing and Bobbie was laughing.  I stared up at the sky in that moment, atheist that I am, and said a silent thank you.  It was heartfelt and honest.  I was relieved.  So incredibly relieved.

Here I was with my daughter, visiting my closest girlfriend with her family and another family, whom I didn’t know, but who were wonderful and we were welcomed.   The children were kind and inclusive, no one looked at me or Emma in that odd way, as though they wanted to say something, but weren’t sure they should.  No one spoke about Emma to me in front of her as though she were deaf.  No one treated her as though she couldn’t understand.  Everyone, children and adults alike, were kind and when Emma insisted on playing her special version of Duck , Duck,  Goose for the 25th time everyone played and came up with inventive word groups and laughed and chased each other around and around. 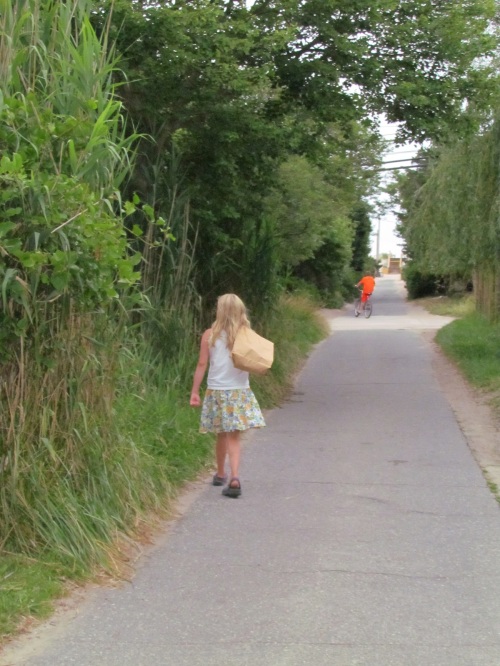 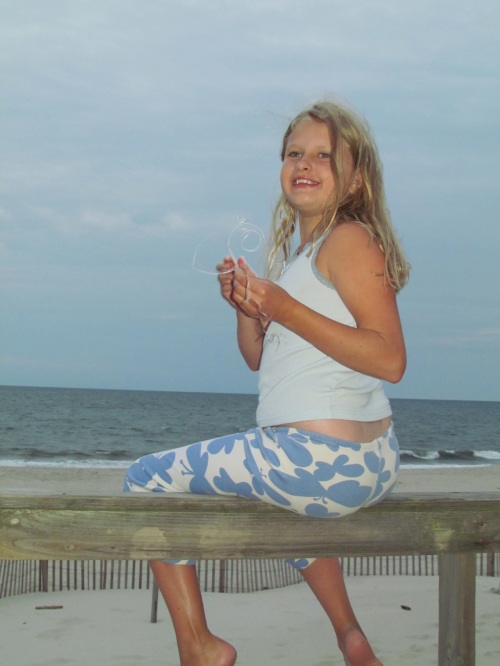 “Sleep wake up, go swimming in the pool, go to the beach, say hi to Bobbie and Mina and Frankie and Molly and Luca, play.  Sleep wake up go swimming, play in the ocean, sleep wake up…” Emma said that first night as I snuggled next to her.

“Wait Em, we’re here two nights and then you have camp on Monday remember?”

Em nodded her head, but the following night she said the same thing. 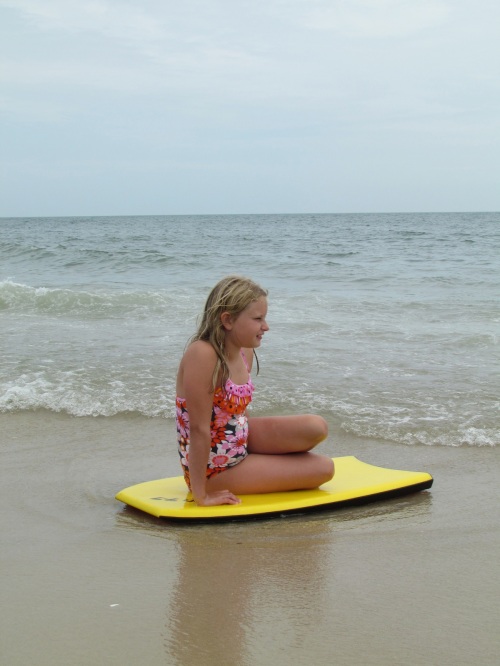 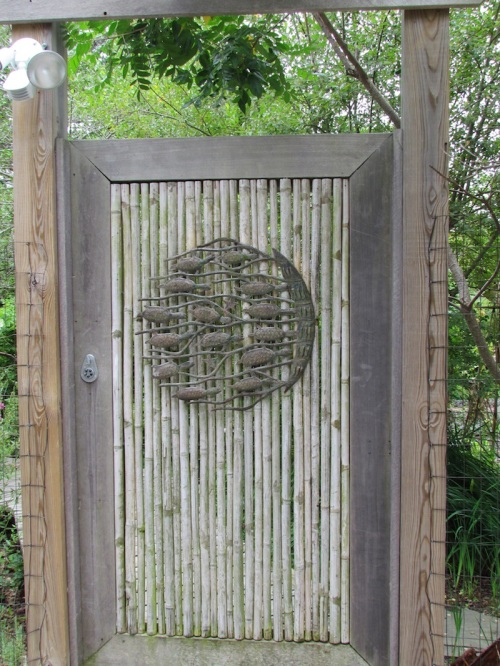 On Sunday morning she said, “Stay on Fire Island with Bobbie?”

“I want to stay with Bobbie?”  Emma said sadly.

Emma nodded her head and said, “That makes me sad.  Come back later?  Come back next week?”

I thought about how fearful I’d been, how I had carefully planned for problems that never transpired.  I felt such gratitude toward Bobbie for having believed this was a good idea and for urging me to go, for providing me and Emma with a safe place to test the waters.  It reminded me of something an elderly woman said to me when I was in my thirties and struggling – sometimes you have to let others believe in you, so you can learn to believe in yourself.

Em at dusk on the beach 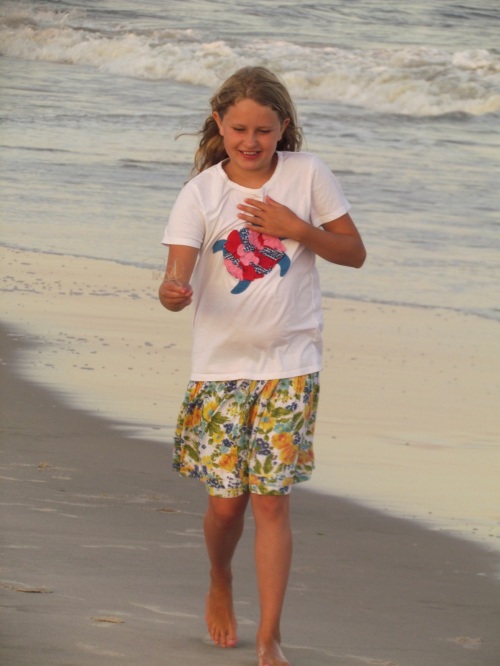 Saturday night on the bogie board 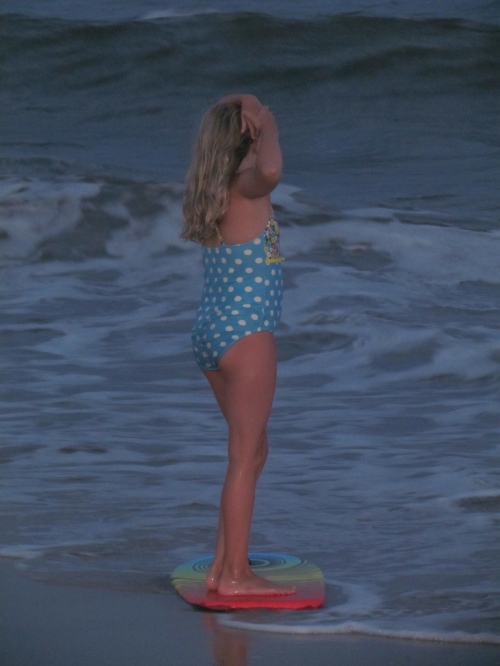 Em, Me and Bobbie heading back to NYC on the ferry 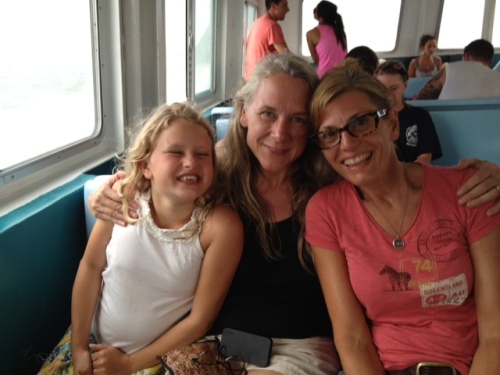 The Beauty in a Conversation

Emma and I are heading out to Fire Island this afternoon with my friend, Bobbie.  This has been cause for great excitement as Emma has counted the days until we leave.  Last night, Emma and I had the following conversation.

Emma:  Go to take Bobbie at the beach!

Em:  Yeah!  So excited to see Bobbie and Mina and Luca.  Going to go in the ocean.

Em:  (interrupting) Going to go play in the sand.

Em:  (Holding up her fingers) Three minus one equals two!  Having a sleepover with Bobbie at the beach.  Going to bring Cokie!  (Cokie is a scrap of what was once a blanket, measuring about five by three inches and is constantly getting lost leading Emma to panic.  We live in dread of this last large scrap one day mysteriously disappearing into the great dark unknown along with the rest of her blanket.)

Me:  But Cokie has to stay in your bedroom.

Em:  Cokie get lost!  Ahhhhh!  Who took it?  Somebody threw it away.  They threw it.  You cannot throw Cokie.  (All of this was said very quickly in an animated voice, it’s a kind of scripting, but it’s within a context in that Emma is expressing her fears and anxiety that her blanket might get mislaid.)  No, not going to bring Cokie into the water.  You can’t bring Cokie onto the beach, that’s silly.  Cokie might get lost!  Cokie will get dirty.  Ick!  Cokie has to take a bath!

Me:  Do you think we should wash Cokie before we take it to the beach?

Em:  Nah.  Have to gotta go.  Max came to the book party.  You hit Max.  You pull Max’s hair.  No.  You cannot pull Max’s hair.  You have to stop.  You can’t do that.  Max is hurt!  (This is another script, but it’s one she made up and it’s really a spoken memory of Richard’s book party celebrating the publication of his novel a month ago.  Max is a great friend and someone Emma adores.  When Emma really likes someone she wants to pull their hair and hit them.  She is still trying to sort out how to resolve some of these impulses while also connecting and making physical contact with another human being without hurting them.  We are working on this.)

Em:  Makes me so frustrated! Grrrrr!

Me:  (Laughing)  Do you feel frustrated now?

Em:  Nah!  Emma’s happy!  Going to go with Bobbie to the beach.  Going to have so much fun!

Just before I had this conversation with Emma, I was talking with my friend Ib.  She said, “It is easy to picture Emma talking more.  She can still be her if she does.  She will talk oddly about odd things that she blisses out about while twirling string, and walk away mid sentence.”

And I wrote back, “Yeah, and I’ll (removed explicative) love that!  Seriously love that!  Because I want to walk away in mid sentence half the time…”  Ib then wrote back “And frankly, in your family, it won’t be that odd.  Hehe.”

Which made me laugh out loud and filled me with so much hope and happiness with the thought that Em and I could converse the way Ib and I do.  And then Emma came home and I told Ib I’d talk to her tomorrow and Emma and I proceeded to have the conversation I’ve transcribed above.

Yup, there are little miracles happening all the time!

Have a wonderful weekend everyone!  The journey continues… 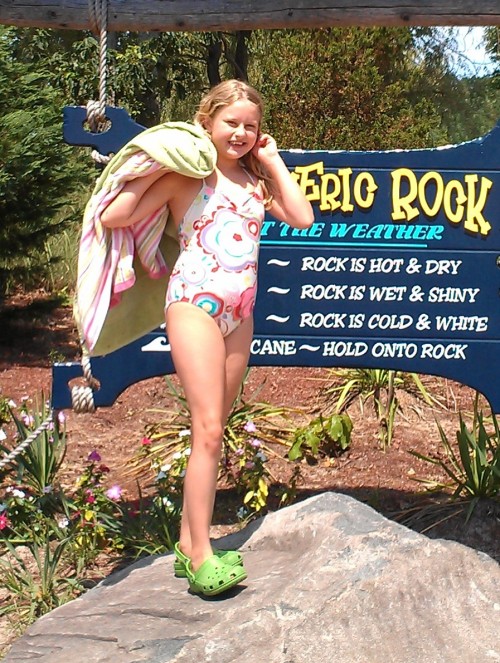