A Story About The Lady at the Zoo

Emma was confounded yesterday when she was told by one of the Central Park Zoo employees that she could not sit on the railing to watch the sea lions being fed.  She was very upset and wanted to go home.  However, instead of biting herself or doing herself injury, she came up with the following story, which is yet another example of her delightful temperament, personality and a wonderful display of the progress she is making in being able to turn something upsetting into a story that was both poignant and very funny.

Before we got on the subway, Emma verbally preseverated in her attempt to work through what had happened.  “Mommy says no.  Mommy go home, Emma stay at the zoo with just Daddy.”   Emma reasoned immediately after leaving the zoo.

“But Em.  This isn’t about Mommy or Daddy, this is about the zoo employees.  This is their rule now.  They won’t let anyone sit on the railing any more.  It’s a new rule,” We told her.

“But I want to sit on the railing!”  Emma cried.  Then Emma flung both arms around me and buried her head into my side.  “I know, I know.  You’re so upset,” Emma said, mimicking words I often say to her.

“Oh, Em.  I know you’re sad.  I know how hard this is for you.  But I’m also really proud of you for the way you’re handling this and talking about it.”

When her beloved R train arrived Emma secured seats for us by the window and then told the following story.

“The lady said, You have to get off the railing!  You have to get down!  Yeah,” Emma nodded her head and frowned.  Then she said,  while stomping her foot on the floor of the subway, “The lady stomped her food and said, You.  Stomp.  Have.  Stomp.  To.  Stomp. Get.  Stomp.  Down!  Stomp.  You get down right now!  Then the lady said, I’m going to get you!  I’m going to tickle you!”  Emma demonstrated being tickled.  She stomped her foot and continued.  “Yeah.  The lady is going to tickle you.  Then the lady had to go home.  She hurt her back.  Bye!  Bye, bye lady.  Lady gotta go home!  Bye!”  Emma waved her hand, like a Queen waving to her adoring subjects.  “The lady had to go.”  Emma nodded her head and feigned looking sad.  “The lady went home and Emma got up on the railing to watch the seal show!  She had to go home because she hurt her back and she has to put on a bandaid.  Now it’ll feel better.”  Emma finished and looking triumphant said, “Emma got to sit on the railing!”

“She tickled you!”  Emma said and then collapsed into giggles.

Earlier in the day, playing on the High Line 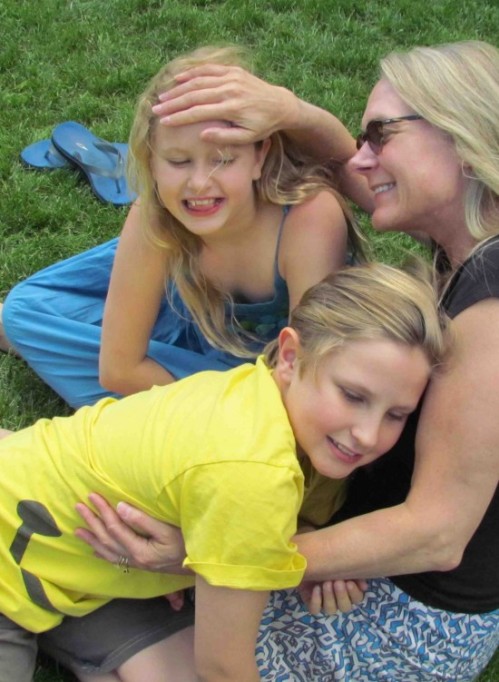 What Wasn’t Said and Other Omissions

I just received a call from Richard who told me after I left to take Nic down to his school bus, Emma went into her room and began crying.  When Richard asked her what was wrong, she said, “I miss Mommy.   See Mommy tomorrow.”

For the past two nights I have been out, not coming home until well after Emma has already gone to sleep.  It is unusual for me to go out two nights in a row and clearly it made Emma sad.  While Nic is now at the age when he looks forward to our evenings out, so much so that he offered Richard $100.00 of his own hard earned allowance (generous and thoughtful boy that he is), “so you and Mommy can go out on a date,” Emma does not share his enthusiasm.

This morning Emma appeared in our bedroom at 5:28AM.  “Emmy, it’s too early.  You have to go back to your bed.”

Emma pointed out the window and protested, “But it’s light out!”

She was technically correct.  The first morning light was just beginning to show itself and though it wasn’t full daylight, you couldn’t argue that it was exactly dark, either.

“Em, look at the clock.  It has to say 6:30 before you come in and wake us.”  But I knew, even as I said this, that I was changing the “rules” on her.  Emma knows she isn’t to come into our bedroom until “it’s light out.”  As the seasons change, this is a dubious “rule” and one far too vulnerable to interpretation to really be meaningful.  Still Emma was doing her best to honor it.

Emma morosely trudged out of our bedroom and I, now wide awake opened up my ipad and began checking my email.  Five minutes later Emma appeared again.  “It says five and three and three.”

“Okay. Okay.”  Emma said and looking forlorn she made her way out of the room.

I could hear her in the living room reciting various arbitrary “rules.”  “Lauren’s class.  No you can’t sit on the ledge, that’s dangerous.  You have to get down or you’ll bump your head.  No not going to hang on the pipe.  You might fall down and hurt your head.  Ouch!  That hurts, you have to go see nurse.  Be careful.  But listen, if you go on the ledge, you might fall down…”  this went on for quite some time and then there she was again.  “It says six, zer0, seven,” she informed me, while peering at the clock.

“Okay Em.  You can stay, but you have to be quiet.”  I scooted over so that she could crawl under the covers next to me.  She lay her head on my shoulder and picked up from where she’d left off.  “Have cereal and toast?  Then play the Wii?  School bus, Lauren’s class, study room with Joe, sleep, wake up…”

As I listened to her, it never occurred to me to note what she wasn’t saying.  In her list of what she expected would take place in the next 24 hours, I was not one of the things she included.  It never occurred to me that that omission was intentional and because she didn’t expect to see me again when she returned home, just as she hadn’t for the past two evenings.

This afternoon, I will be waiting for her when she returns home.