Having it All Often Means Doing it All

*The title of this post is said in a joking, not exactly sarcastic way, but certainly not in a serious way.  Throw in an eye roll as you read and a knowing grin, and you’ll get it!

So much to tell you, but where to begin?

For Mother’s Day my wonderful husband decided he would interview me on his radio show and asked if I wanted to invite a couple other moms to come on  the show too.   “Yes, please!” I said and promptly invited my friends, Ibby Grace of the blog Tiny Grace Notes (AKA Ask an Autistic), Paula Durbin-Westby, who has two blogs, one with her name as its title and the other – Autism Acceptance Day (which is a terrific resource filled with interviews among other things) and Lauri Swann Hunt of the fabulous website and blog Ollibean, where both her son Henry and Amy Sequenzia often post among many other wonderful writers.  The show aired last night at 8:30PM – 10:00PM Eastern Daylight Savings Time and has been archived ‘here‘ for those who would like to listen.  We do not have a transcript of it yet, but my fabulous friend Alyssa of the blog, Yes, That Too, suggested we break it into ten minute chunks, which means we need eight more people to volunteer.   Anyone who is so inclined can contact me here or at emmashopeblog@gmail.com and we will get a transcript written!

I meant to write a post about all of this yesterday so anyone who wanted to listen live, could, but Richard came down with some sort of stomach bug that kept him up for the better part of the night and Em woke up in the middle of the night complaining of a sore throat.  When I went to her she was burning up, so I stayed with her for the rest of the night.   By yesterday morning, which was also the first day of my “play date with jewelry” trunk show, I realized, I was not going to be able to keep all the necessary balls in the air.  It was that moment when you realize the reality and what you had envisioned, were not meshing even remotely and so priorities needed to be set.  Nic, who was off early to go on a three-day field trip, made it out the door without mishap.  A doctor’s appointment for Em was secured. Joe, Em’s devoted, dedicated and all around amazing therapist, was called in for reinforcements. Richard was checked in on and given liquids between preparations for my trunk show.

By the way, the show continues today, for those who might be interested in playing with jewelry and seeing my Transitions Collection, which I’ve finally gotten up on my Ariane Zurcher Jewelry website, and joining me to play with the real thing and so I can give a live demonstration of all the various possibilities, many of which the website does not yet have or do. 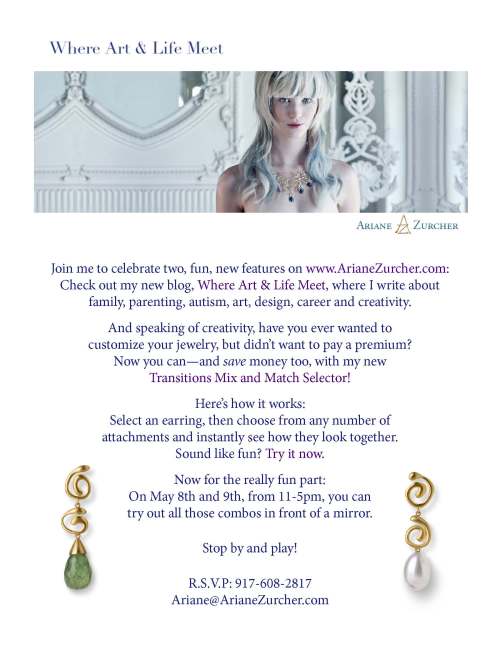 So given that the day was not proceeding as optimally as planned, it was kind of fitting and perfect that Richard, albeit, groggily, insisted that the radio show (dedicated to motherhood and all that entails) must go on as planned!  So it did. And other than a couple of minutes when Richard and I were inexplicably tossed out of the show, it was great fun, everyone was wonderful and I think Paula Durbin-Westby may need to seriously consider hosting her own radio show in the foreseeable future!  As I said at the end of the show, it is these Moms and women like them, who have helped me be a better mother to both my children.  I am so lucky and very, very grateful.

Merlin Assists in Preparing for the Trunk Show 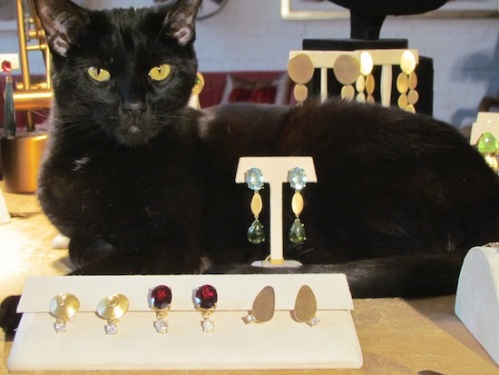 25 responses to “Having it All Often Means Doing it All”