I’m halfway through a four-day training with Soma and I have filled more than half a legal sized notepad with notes.  Yesterday we covered Mental Mapping/ the different stages of RPM and Implementation.  I told Soma about my encounter with the child who didn’t want to work and immediately hit themselves.  I described how I’d had them spell “hitting” on the letter board and how this had immediately diffused the situation.  Soma then gave me more terrific suggestions on how to devise a lesson plan around an action such as hitting.  An example of this is (I”m making this up) “I would like to know more about hitting.  What else can you hit?  Do you hit the sky or a ball?”  Soma spoke of how when emotions are running high, switching to numbers and math, which have no emotion can be helpful during emotional outbursts.  “How many times can you hit the ball? Here let’s count.  1, 2, 3, 4, 5.  You hit 5 times and if you hit once more, that would be 87 times or 6 times?”

We spent a great deal of time discussing the ways in which one can learn about a student through their preferences, stims, what they’ve been exposed to, skill levels and abilities, tolerance levels, acquired knowledge and defenses.  Soma then covered how one goes about implementing all of this through lesson plans.  Each step of the way one presumes competence in the student’s ability to learn and be taught without presuming that they already know how to read, write, add and subtract.  Through the various activities it quickly becomes clear whether the student needs to be shown how to spell a word such as “hitting” or whether they already know the word.  On the first day one of the students, whom Soma had never met before, sat down and after working with her for fifteen minutes or so, was asked what his favorite color was.  She had him choose from one of two stencil boards for the first letter.  From that board he chose the letter “r”.  He then proceeded to type ‘r’, ‘e’, ‘d’.  The following day a number of the people  taking the training expressed skepticism that the student actually could read or write.  One suggested that red may not have been his favorite color.

When asked how they knew that he couldn’t read or write, they weren’t able to give specific reasons, it seems many just assumed he could not.  It reminded me of the years and years I spent believing a whole variety of things about my own child, which turned out to be untrue.  I had no proof that the things I thought were actually true, I had just assumed and then behaved toward her as though it were fact.  Perhaps one of the single most destructive things we can do to our children, students, the people we meet is to make assumptions about their intelligence and abilities.  Beliefs based in nothing other than unfounded assumptions and our own biases of those who look or seem to us as not being capable.  These assumptions are dangerous and can do real harm.  As I’ve said before ~ to presume competence and be wrong will do no harm, to presume incompetence and be wrong can and will do tremendous damage. 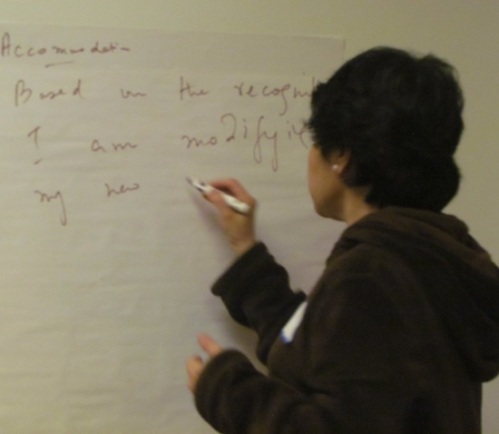