This past Christmas I bought Em a snow fort.  Em loves bouncy castles and the snow fort looks a bit like a bouncy castle.  It seemed like an excellent idea at the time, except that it was missing a key component – it didn’t bounce.  It’s one of those gifts that looks good when you receive it, but once it’s been constructed it’s not so interesting.  Even I wondered, once we’d blown it up and put it out in the snow, now what?  What exactly does a kid do inside a snow fort?   Em was a trooper and sat inside it for a minute or two before extracting herself. 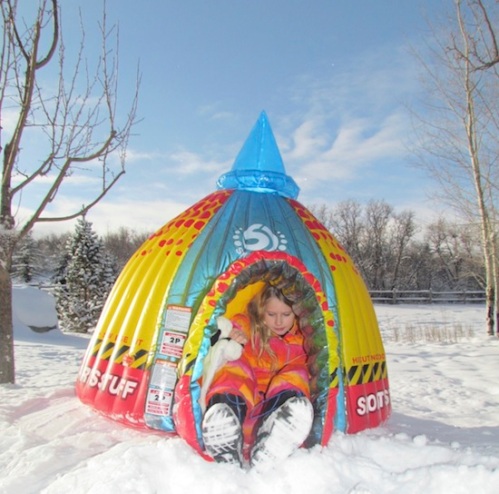 “No, it’s not a bouncy castle,” Emma said shaking her head as she wandered back into the house.

I stood there looking at it for a minute before following her.

“It doesn’t bounce,” I told Richard.

“Right.  It is without bounce,” Richard reiterated.

“It’s basically a piece of colored plastic,” I replied.

“What were you thinking?” Richard grinned at me.

I could interrupt this dialogue by going on at length about how Richard has the single best smile of any human being I’ve ever met, how when he grins these little dimples appear that take my breath away, how I can become so distracted I lose track of time, thought, words… I could do that, but I won’t.

Now where was I?  Oh yes, thinking… what was I thinking?  Well, the truth is I didn’t think it through.  I was thinking about her love of bouncy castles and how this looked sort of like one.  I remembered over the summer how we’d gone to our local YMCA to play on the bouncy castle they’d set up for a limited time and how the guy setting it up didn’t know how to operate it and finally Emma had to tell him.  At first he didn’t pay attention to her, probably assuming she didn’t know what she was talking about because of her non-fluency with language.

“What’s she trying to tell him?” another mom asked me as we watched from across the room.

“She’s telling him that he needs to tie the other end and that he has the air pump attached to the wrong tube, but he won’t listen to her,” I explained.

“Should we go over?” the mom asked.

“I already did.  I told him to listen to her, but he seems to believe he knows what he’s doing,” I said.  “I’m betting on my daughter.  She is rarely wrong about things like this,” I added.

“I’m betting on your daughter too,” the other mom said.  The guy fumbled some more with the defeated looking, semi-inflated bouncy castle as Emma looked on with an exasperated expression.

Finally he did as Emma instructed with a little help from me and the other mother, and the bouncy castle was, well, bouncy as it was meant to be.  Emma was ecstatic and soon joined by a dozen other kids all screaming and bouncing together.

That’s what I was “thinking”.