If you listen to the news, which I haven’t but Richard, in an uncharacteristic display of interest regarding the weather, has been keeping abreast of the latest news by reading updates on the NYTimes online, you already know Hurricane Sandy is heading inland and may or may not hit New York City at some unknown point…  it’s hard to say. Meanwhile, everything is shut. All the stores are closed, all public transportation has screeched to a halt, friends of ours who are in “Zone A” have had the boilers in their building shut off since yesterday evening, some others have been evacuated, and yet, other than the occasional breeze and light sprinkle, there is nothing to suggest anything is amiss.

On Saturday as Nic and I did our weekly grocery shopping run, Nic commented on the long lines. The typical four-hour window given for delivery of one’s groceries had been suspended and other than thinking it strange that so many more people were out getting groceries, it didn’t occur to me to be concerned.  It has to be said, we do not watch the news on television and my reading of the NYTimes online is topic specific.  When Nic asked why so many people were grocery shopping I said something about how it was always like this on Saturdays and then went into a lengthy explanation about typical Monday through Friday work weeks and how it made sense that Saturday was a good day for grocery shopping. By the glazed expression on my eldest child’s face, I’m pretty sure I lost him after the first 30 seconds. Looking back, the incredulous expression on the woman’s face directly behind us now makes sense and I feel a little saddened to realize it was not a look of awe at my brilliant analysis of the shopping habits of fellow New Yorkers.

Last night I explained to Emma that there was a big storm headed our way and because of it, school would be closed and that there might be heavy rain during the night, but that we were all going to be safe.  I was a bit more concerned that the changing air pressure might wake her in the night, causing her pain and upset.  When she woke this morning and came running into our room, I said, “Em, has it started raining yet?”  She said, “Rain, lightning and thunder!”

“Really?” I said, peering out into the darkness.  “I don’t hear any rain.”

“It’s raining.  No school,” Emma said, with the kind of unerring certainty that does not invite argument.   Then she pulled the bed sheets up over her head.

I asked Em if she wanted to go up on the roof to see first hand what the weather was like.  I grabbed my camera and rain gear .  “Oh honey,” Richard said as he watched me zip up my rain jacket, “you’re going to document the storm,” he wiggled his fingers to make quotation marks.  “I love that.”

“I love that you’re going out to record the weather and not hunkering down into fear-bomb-shelter mode,” he looked at me with what I’m pretty sure can only be described as pure, unadulterated, adoration and admiration. (I am convinced I’m reading his look correctly and NOT the way I completely misinterpreted the look of the woman in the grocery store.  Of course, I have been wrong before…)

Em on the roof just now in appropriate, pre-Sandy, attire 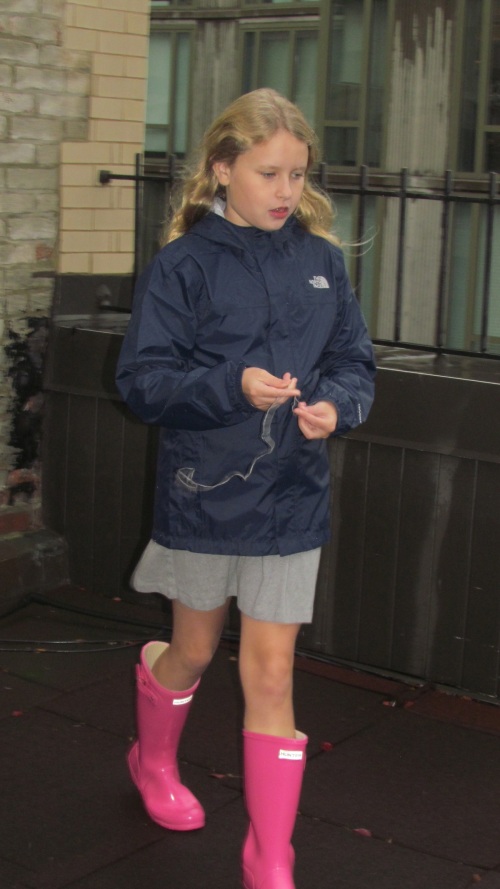 18 responses to “Awaiting the Storm”