Emma began calling her dad, Cobra a few weeks ago.  When she first said it, as in, “That’s Cobra!” while laughing and pointing to Richard, I had no idea why she was calling her father a venomous snake.  It wasn’t until later when someone said, “Isn’t that the social worker in Lilo and Stitch?”  that the mystery was solved, or at least one part of the mystery.  Why she thinks Richard, in any way, resembles Cobra is something we are still pondering, though I have a couple of thoughts. (As usual..)

Cobra, or Cobra Bubbles, as he is known in the movie Lilo and Stitch is a social worker, though he looks more like he’s in the CIA, with his dark suits and dark glasses, which he wears regardless of whether he’s inside or out and is bald.  He is also African American, is huge and speaks in a baritone booming voice and is in a state of perpetual displeasure, which he expresses with lines like, “And in case you were wondering,” said while looking over his dark glasses, “this meeting. Did. Not. Go. Well.”

Emma loves Lilo and Stitch.  She mimics Lilo’s bratty, high pitched voice and recites whole sections of the movie sometimes to comical effect.  Such as when the upstairs neighbor’s kid was running back and forth early one morning, Emma looked up at our ceiling and said in a perfect imitation of Lilo’s voice, “Aliens are attacking my house!”  It was a hilarious moment.  Emma, being the ham that she is, loved that I was laughing so hard I could barely breathe.  So when Emma pointed to Richard last Sunday on the way to the number 2 train, and said, “That’s Cobra,” then pointed to me and said, “That’s Mommy!” we asked her why Daddy reminded her of Cobra.  She grinned and said, simply, “Cobra,” before weaving her arm through her dad’s and then mine.  The three of us walked that way as Emma spoke in Lilo’s whiny voice, “We’re going to go home now.  Take the number 2 train and then eat dinner.”

By the end of the movie Cobra has become very much the family friend and is no longer threatening to put Lilo in foster care.  On the contrary he is intent on keeping the family together and has become their protector.  Which, my guess is, where the association with her dad lies.  Daddy, the larger than life protector of the family, kind and loving. 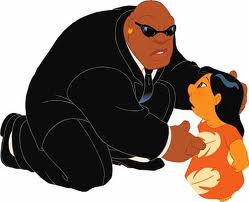 7 responses to “Cobra aka Daddy”