When Emma was first diagnosed Richard and I decided to start noting her progress in a little leather bound book we entitled – Emma’s Hope Book.  The idea was that it would be just that.  A book filled with hope.  After the first few months of making sporadic entries, we wrote in it very little.  We were immersed in Emma’s “boot camp” of 35 hours of ABA, with therapists coming and going, then there was the speech therapy and the occupational therapy as well as the homeopath, the cranial sacral therapist and the DAN doctor.  In addition, I was caring for Emma’s older brother Nic, who we had decided to keep out of nursery school, (even toyed with the idea of homeschooling both the children) before we knew of Emma’s diagnosis.

A few months ago I came upon the original Emma’s hope book and flipped through the 27 entries spanning the time of her diagnosis – 10/2004 – April/ 2010 when I began this blog.

The first entry was written by Richard in October, 2004.  He wrote:  “Emma said, “Peek-a-boo-I-see-you!”  Pointed to her eyes when I said, “no eyes.”  I said – “Bertie hit you with his tail” and she immediately grabbed his tail.”

In the beginning we looked for any sign of understanding or attempt to communicate, no matter how small.  While other two-year olds know well over two hundred words, Emma said very little.  It was difficult to gauge how many words she really knew, as days would go by with no words spoken at all, then other days she would say half a dozen words that she never repeated.  I now wonder that those words weren’t things she’d heard and was echoing back, but didn’t really know or understand.

In any case, the first Emma’s Hope Book never got off the ground.  It was suppose to be a document of hope, something we desperately wanted to feel, but often had in short supply.  We would hear of some new treatment, a diet, biomedical intervention, or therapy and would feel a surge of hope, only to feel that hope dwindle as the months wore on and she made little if any progress. When we learned of the stem cell treatments in Central America, we felt another surge of hope, which was when I began this blog.  It was intended to show her progress from the stem cell treatments.  By the third treatment, we still hoped stem cells would be the thing that threw Emma out of her “autism” and into our world of “normalcy.”  But whatever progress she’s made from the stem cell treatments is not something we can pinpoint or even know with any certainty.  They may have helped, but they just as easily may not have.  We never saw such a massive uptick that we were left without doubts as to their effectiveness.  This has been our experience with almost everything we’ve tried.  All the biomedical interventions, all the behavioral therapies, all of them have done very little.   Or perhaps it is more accurate to say – None of them have had a huge impact.

But, call us crazy, we keep trying to find ways to help her.  We keep looking.  We try to keep an open mind.  We try to keep our hope alive.  There are days when our hope falters, though usually it is just one of us who feels particularly glum and the other is able to infuse some hope into the conversation.  Every now and then we both feel a lack of hope and that is when we will remind each other to look back.  We look at how far she has come.  The one intervention that has made a huge difference is Emma’s literacy program.  We remind each other that just one year ago, Emma couldn’t form all the letters of the alphabet, now she is writing complex sentences, uses the past tense and is often able to use the correct pronoun in answering a question. She did not know what a math equation was, let alone able to solve one or write one.  We are often exhausted, but even through our exhaustion we are able to enjoy and appreciate Emma in all her Emmaness.   Just as she is.

Emma found this old Halloween Costume of Nic’s and put it on saying – “I’m a monster!” 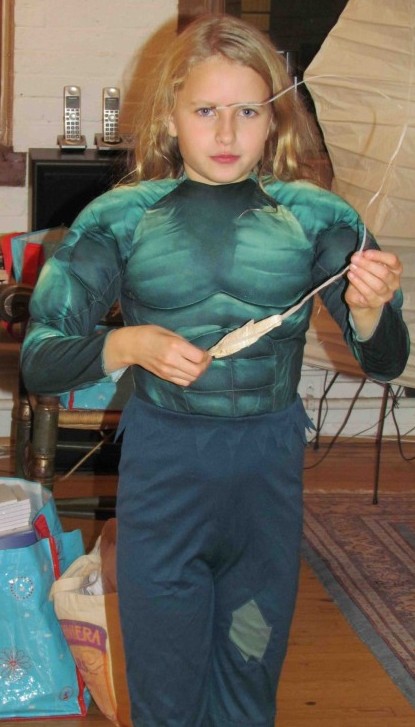 4 responses to “A Look Back”