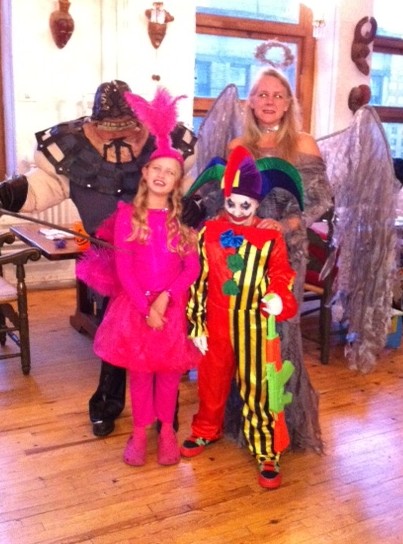 (Something odd happened in almost every photograph taken – either Emma’s or my eyes look creepy.  I figured since I was dressed as a “Fallen Angel” I should post the one with my weird eyes.)

In New York City, a great many people, adults and children alike get dressed up for Halloween.  And not just those who walk in the epic Halloween Parade that begins in the village and winds its way north until it ends just a block from where we live.   (This is in explanation to those of you who might think we’re peculiar – though we probably are.)  We live in Chelsea where at least eight blocks of brownstones go all out for Halloween.  New Yorkers take their Halloween very seriously.  The brownstones don’t just have a couple of fabulous pumpkins on their stoops, the building’s facades are covered in cobwebs, enormous black hairy spiders hang from windows and doors, strobe lights blink, Halloween themed music blares from speakers rigged outside (Michael Jackson’s Thriller is a big hit), a coffin with a corpse that suddenly comes alive decorates a front garden, dismembered limbs hang from trees, a couple of the brownstones even used dry ice to create a fog that meandered down the block. People travel from all five boroughs to trick or treat on these eight blocks, they have become so renowned.

We usually try to get an early start as the streets become so crowded it’s almost impossible to squeeze through the crowds by 8:00PM. What with Richard’s broad shoulders from his executioner’s costume and my tattered wings, we were like a double-wide, the Hummer of costumes, taking up most of the sidewalk, requiring us to walk single file.  I clocked half a dozen people inadvertently with my wings, though everyone was forgiving – one man even said in a reverential whisper – “I’ve been touched by an angel.”

Richard upstaged all of us though.  Every now and again I would turn to find him nowhere in sight.  Ten minutes later he would catch up, having been grabbed by someone who insisted on having their photo taken with him.

One of many Chelsea brownstones transformed for Halloween 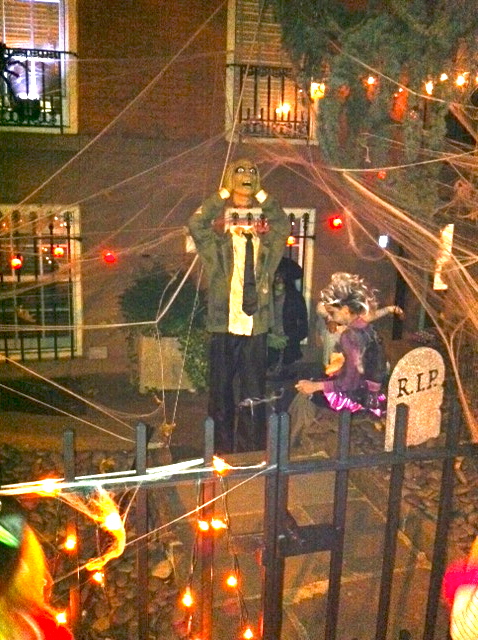 Emma laughs with her scary dad 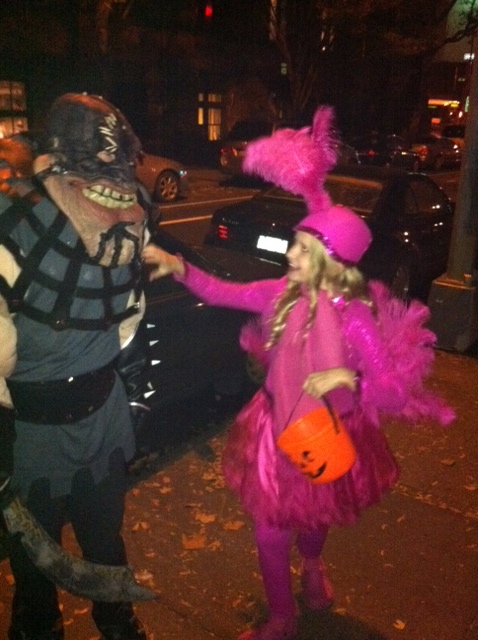 One of the dozens of shops open late for Halloween – This unicorn was one of my favorite costumes – look at the pose!

Luckily, Emma has never eaten the Halloween candy given to her, much to her brother Nic’s delight.  She did say at one point, while holding a lollipop, “Just taste it!”

“Just lick it!”  She began unwrapping the lollipop.

“It’ll make you sick,” she said, putting it back in her halloween basket.

For more on Emma’s journey through a childhood of autism, go to:   www.Emma’sHopeBook.com

2 responses to “Halloween in New York”