Today begins day 4.  It appears that Emma has a cold – red sore throat, cough, runny nose, slight fever in the morning.  I do not believe her cold has anything to do with going on this new diet.  We began various tinctures last night as well as omega supplements & cod liver oil.  Amazingly she took all of these things with little protest, even swallowed two capsules.  Her spirits are good and while she still isn’t eating much, she is active and cheerful.  As I write this she is singing and doing a dance in the living room.

Last night I took a break and met a friend for a few hours. Just as I was leaving Emma became extremely upset because her carousel book was missing and she couldn’t find it.  Richard pushed me out the door.  “I got this honey.  Go.”

Later Richard texted me this photo. 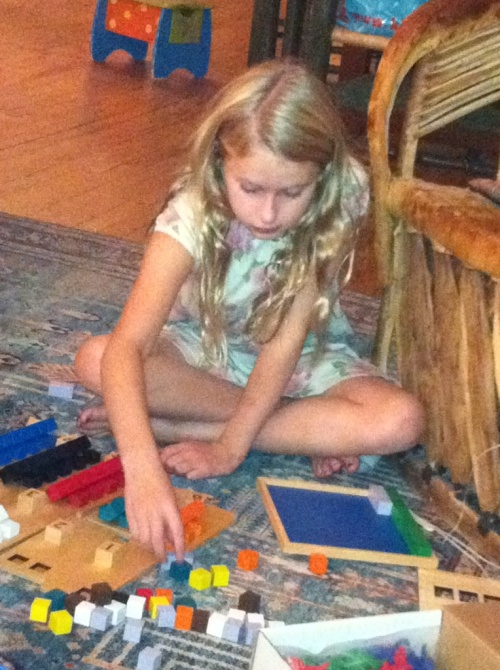 Evidently Emma came over to Richard and asked if she could play with her math blocks.  (The following conversation is one that Richard texted to me.) “Emma, do you want to play with your pattern blocks or look for your carousel book?”

As she played, making patterns, adding and subtracting and making equations, Richard found her much coveted Carousel Book.  He proudly held it up to show her and she barely glanced at it, so absorbed in her math.

“Keep playing with the blocks.”

“Okay, Emma.  I’ll put it in your bedroom okay?”  He headed to her bedroom.

Richard turned and said, “Aren’t you going to say thank you Daddy for finding your book?”

“Thank you Daddy.”  Upon which she returned to playing with the blocks for awhile and then very neatly packed them all up in their box again.

This was the first time Emma has asked Richard to stay with her while she fell asleep.

And stay he did.

For more on Emma’s journey through a childhood of autism, go to:   www.emmashopebook.com