What lengths would you go to if your child were diagnosed with autism?

This blog is about what we have learned, what we have done and continue to try in the hope that we may help our daughter Emma, now 8 years old, lead a life that includes deep friendships and the powerful bonds that result from being able to communicate with one another.  A life that is enriched by our interactions..  this is what I dream of for her and what drives us to go to such extremes to help her, hopefully, achieve some day.

Five and a half years ago we received the news that she had been diagnosed with PDD-NOS (pervasive developmental disorder – not otherwise specified).  Since then it has been nothing less than a wild roller coaster ride of hope, disillusionment, gratitude, determination and perseverance.

Here are some of the therapies we have tried in the last five plus years:

Homeopathy – up to 13 tinctures a day delivered orally – suppose to help her gut issues – no noticeable change after more than 10 months.

Cranial Sacro Therapy – did seem to help her constipation issues at first, but over a longer period (close to a year) did not appear to help enough to warrant continuing.

Qigong Master – suppose to help regulate her “energy flow” and promised to “cure” her autism – no discernible change after almost 6 months.

Chelation – we did one round before discontinuing upon advisement from a number of lead and metal specialists out of Albert Einstein College of Medicine.

Detox Foot pads – Pads that supposedly draw toxins from the body while she slept.  No noticeable change after several months.

Brushing Therapy – Emma became very hyper as a result of brushing therapy and after her sleep became disrupted we discontinued.

Auditory Integration Therapy – while this therapy did not seem to adversely effect her, it did not appear to help either.  We discontinued after a few years when she began objecting to it.

Hyperbaric Chamber – We did not do more than 10 sessions.  So I cannot comment on whether this may have helped or not.  We discontinued because we were starting the stem cell therapy and wanted to do one over the other.

Stanley Greenspan’s Floortime Therapy – We continue to use Stanley’s DIR methods.  Emma has made noticeable improvements in language – both receptive and expressive – as well as shows a real interest in initiating play with others, both adults and peers, as well as a huge uptick in imaginary play as a result.

We took our daughter Emma for her first bout of stem cell treatments with the hope that they might help her autism in March, 2010.  The Institute for Cellular Medicine was introduced to us by Emma’s neuroscientist in New York City.  This treatment is in it’s infancy, they have only treated about 100 autistic children, but are seeing promising results.  The stem cells were harvested from umbilical cord blood and mixed with her own blood serum..  They then injected this mixture intrathecally and intravenously on Tuesday and again on Thursday.  She was sedated for all procedures.  Emma had a bad reaction to the first round, evidently fluid leaked from her spinal cord causing blinding headaches and vomiting.  We were able to calm her with pain medication and by Wednesday evening she felt much, much better.  We decided to go ahead with Thursdays treatment and had them sedate her after the procedure to ensure that she lie flat and thus lessen the likelihood of seepage from her spine.  She was also given a drug to reduce nausea.  She rested in the hospital with us by her side for almost four hours.  We have been told that we should not expect to see any significant change for a month or two.  We will be returning to Costa Rica for round two in August. 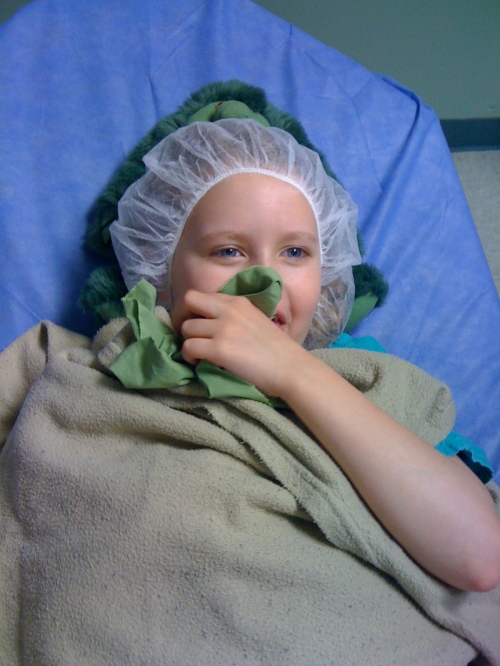