This is a topic I would prefer not to discuss, but a few things happened recently that make it difficult not to write about this.  So… here goes…

Facilitated communication has had a bumpy history.  It began in the ’70’s and has been lurching along ever since.  There have been studies done, both proving it’s validity and others proving it as an invalid method of aiding those who do not speak to communicate.  This post is not about whether FC is valid.  Those who do not believe in FC’s ability to help those who cannot speak will not be swayed by anything I write here.  For those who are interested in reading more about FC and its history you can do so by reading this and this and the many links embedded in these posts.

What I will write about however, is all those FC users who have gone on to type independently.  And here is where things get really interesting.  Those same people who are convinced FC is all a mirage, a kind of non-speaking, Autistic version of an elaborate magic show, remain convinced the non-speaking person who now types independently is not really doing so.  Those people continue to insist it is a “hoax” despite witnessing, some even after seeing in real life, a non-speaking person type on their own.

Just to be clear, I am not writing about hand over hand or a hand on a forearm assistance.  I am writing about the many people who began typing with a facilitator, but who now type independently.  By independently I am referring to those who may still need a trusted person standing nearby.   Some type with another person’s hand placed on the middle of their back, others may need a hand gently placed on their shoulder.  Yet these same people who speak out forcefully, often aggressively to any who dare write about someone who is non-speaking and writing of their experiences, say even a hand on the back proves these non-speakers cannot and do not type their own words.  They insist that they are merely puppets doing the bidding of the person who is physically nearby.

What fascinates me about this is that these same people who insist it’s all a “hoax” (this is the word they usually use) would rather believe a person can move a seated, non-speaking person’s hand to hit specific keys on a keyboard by virtue of their physical presence, rather than entertain the notion that this non-speaking person, may in fact, be typing their own words.  One such person commenting on a blog post about something unrelated to FC, but that had a link to Barb Rentenbach’s book, I Might Be You, wrote, ” I don’t consider typing with an arm on the shoulder independent typing. You can clearly see the facilitator nudging her towards the letters.”  Not to quibble, but seriously?  So this is like some sort of typed ventriloquism?  Touch someone’s back and direct them to write thoughts that are not their own?

I urge any of you who believe this is possible to try doing it… place your hand on another’s shoulder or the middle of their back and see if you are able to control what that person then types.  And while you’re at it, try standing next to the person and psychically urge them to write something.  It seems incredible, but there are those who not only believe this to be the case, but they then demand “proof” that this person is typing independently, despite the fact that they’ve just been given the very “proof” they asked for.  Evidently “proof” is subjective.

What bothers me about all of this is that those who are typing to communicate are doing so because they have no other means.  This is not a “choice” that’s being made.  The people who continue to insist they are a “hoax”, that it’s all a “mirage”, that they are being “controlled” are taking away the only way they can communicate.  They are silencing them.  They counter this assertion by saying that on the contrary, they are actually “advocating” for those who do not speak and are protecting those who are at the mercy of a facilitator who is putting words into another’s mouth.  Yet, even when confronted with a non-speaking person’s typed words, typed without anyone’s hand on their arm, they continue to insist the very presence of this other person is all it takes.  The transference of perceived power to cover up their dehumanization of another is convoluted.

If you google “Carly Fleischmann” the third entry that comes up is “Carly Fleischmann fake”.  Sadly Carly is not alone when it comes to such beliefs.  There is a long and horrible history of non-speaking people being discounted and effectively silenced by those who believe they cannot possibly be intelligent, insightful beings.  There are those who will dismiss people like Carly as an anomaly, a “prodigy” and thereby ignore the years of effort it has taken her to get to where she now is, or they conclude she is a “fake”.  There is nothing new about the silencing of human beings deemed inferior.  (Read Inventing the Feeble Mind by James W. Trent, Jr.)  The ingrained prejudices and dehumanization of Autistic people continues.

As Barb Rentenbach writes, “I might be you.”  For those who doubt that sentence is her own, you better hope those words are wrong. 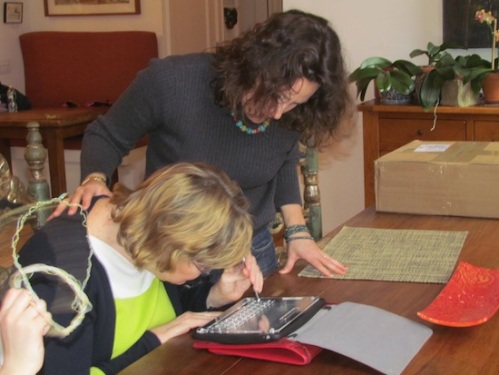 73 responses to “Non-Speaking People Who Type”